K-Fed is officially a married man. After five years with his baby mama, he decided to put a ring on her. 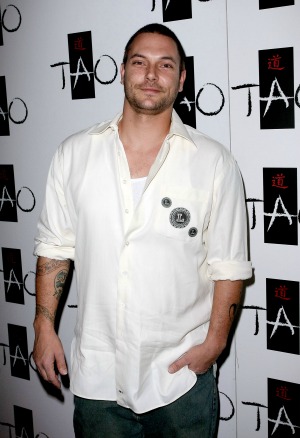 He may have five children from three different mothers, but Kevin Federline proved he’s the marrying kind. On Saturday, the former backup dancer married Victoria Prince in Las Vegas, Nevada.

The 35-year-old dad and his 30-year-old wife have one daughter together, Jordan Kay, 2. She acted as the couple’s flower girl at their penthouse wedding at the Hard Rock Hotel & Casino.

The Hunger Games’ Sam Claflin is a married man >>

Prince looked gorgeous in a Maggie Sottero princess-style gown with a sweetheart neckline while Federline looked rather conservative in his Jean Yves black suit with a gray tie.

The bride was walked down the aisle by her father to the Twilight song “A Thousand Years” by Christina Perri.

In her vows, she told her new husband, “I promise to be the best mother to our children, and be the wife that you deserve. I can’t wait to spend the rest of my life with you.”

The altar was filled with red and white roses as the couple sealed their big moment with a kiss. Later, the duo danced the night away to celebrate their nuptials.

The wedding was a surprise to the bride though. It was Britney Spears’ ex-husband who proposed to Prince during their Vegas vacation.

In a video clip shown by E! News, he got down on one knee and asked, “Victoria Prince, will you marry me in two days, in front of 30 of our closest family and friends?”

Clearly, the bride was okay with the quick engagement and marriage.

The couple started dating in 2008 and their first child together was born in August 2011.