In a moment that was both hilarious and sad, fans watched as Steve Newlin met the sun on the last episode of True Blood. Actor Michael McMillian discusses the scene and what it was like learning he was going to die. 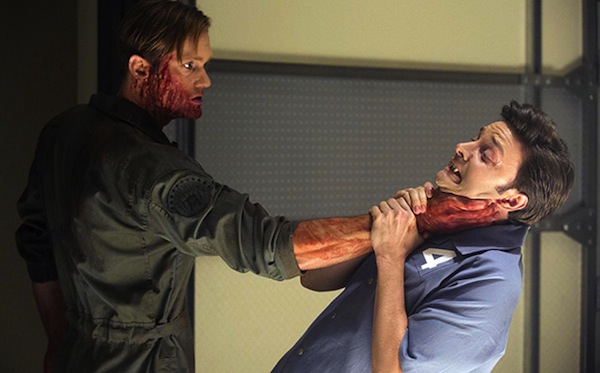 It’s a well-known fact on True Blood that no one is safe. Characters can die at any time, without any warning, and the deaths come frequently. For an actor, it means losing your job at any turn. Good thing Michael McMillian, who plays Steve Newlin on the show, is such a good sport about it.

McMillian sat down with Entertainment Weekly and told them the cast would check in with each other about the pending season deaths. “All of us in the cast — well, I’d say some of us — have always lived in constant fear that we might be killed off. Lauren Bowles, who plays Holly, she and I used to keep in touch with one another and just say, ‘Have you heard anything yet? Do you know if something’s happening to you this season?'”

On this week’s episode, Eric (Alexander Skarsgård) stopped Steve from drinking any of Bill’s blood to protect him against the sun. As his ex-wife Sarah opened the sun roof, Steve screamed his love for Jason and exploded into a mess of blood.

When he found out Steve wasn’t going to make it through Season 6, McMillian had one request: “In that conversation where [showrunner Brian Buckner] told me that they were gonna be killing me off, I had asked if I was gonna get a chance to work with Ryan Kwanten again. We hadn’t worked together all season, and that was really my only disappointment from this year, because I just love working with Ryan and I always love the Jason-Steve stuff, and I felt that they had left that door open for more. In my mind, Jason was always Steve’s true paramour. So when he told me that we weren’t [going to work together], but Jason would be present for Steve’s execution, I asked him if my last line could be, “I love you, Jason Stackhouse,” and he said yes — if it would make me feel better. He wrote it into the script, and that was super kind of him.”

Though Michael McMillian has left the show, the days of Steve aren’t over just yet. This fall, the book Steve Newlin’s Field Guide to Vampires (And Other Creatures of Satan) will be released. McMillian helped co-write the story.

McMillian explained, “This was Steve Newlin’s field guide that he was putting together after the Fellowship of the Sun takeover by the vampires at the end of Season 2 and before he was turned sometime in that year where Sookie was missing… It’s kinda like a True Blood wiki in a published form through the eyes of some of the funnier characters on the show.”

What did you think of the last episode of True Blood? Were you sad to see Steve Newlin go?