There has been a lot of speculation surrounding Jennifer Aniston and her possible baby bump recently, but the actress has denied these rumors. 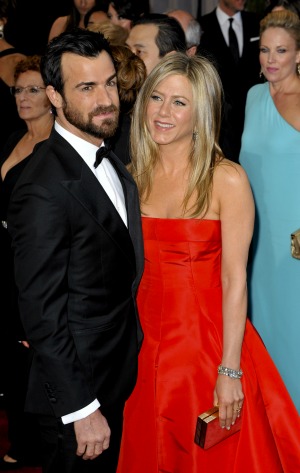 It is a tad awkward having to admit you have put on weight, so imagine having to tell the world that you have — just to squash pregnancy rumors. Poor, Jennifer Aniston!

The actress is known to be a bit of a health fanatic, with her love of healthy eating and yoga. However, she keeps getting asked if she is pregnant and the speculation is surely putting pressure on her personal life.

She has her forthcoming nuptials to look forward to, but that could be hard to enjoy if the media are constantly making her feel like she’s put on weight.

Aniston told The Kyle and Jackie O Show in Australia on Monday that the pregnancy rumors are merely the result of gaining “just a couple of pounds.”

The We’re the Millers actress said, “It does feel a bit like they’ve exhausted the question, and also the speculations. It’s all been pretty much exhausted. Why not just wait until we actually get to have the fun of announcing something, who wants to play the guessing game, whether it be (a) family, wedding, this, that, the other thing.”

She went on to add, “We have a no junk food policy pretty much all the time.”

While there may be no baby on the way and the date of the couple’s wedding is still unconfirmed — although there was the suggestion of a secret wedding last weekend — Aniston was kind enough to throw a star-studded birthday bash for her fiancé Justin Theroux‘s 42nd birthday on Saturday at their Bel Air mansion in Los Angeles.

Aniston has previously spoken about her wedding to the Associated Press during a July interview, “We just want to do it when it’s perfect, and we’re not rushed, and no one is rushing from a job or rushing to a job. And, you know, we already feel married.”

Perhaps it’s time to leave Aniston alone? We all need to eat and we think she still looks beautiful!