Taylor Swift is widely known for using her ex-boyfriends as inspiration for her songwriting, although she feels they are some of her “biggest regrets” and has a special list where they belong… 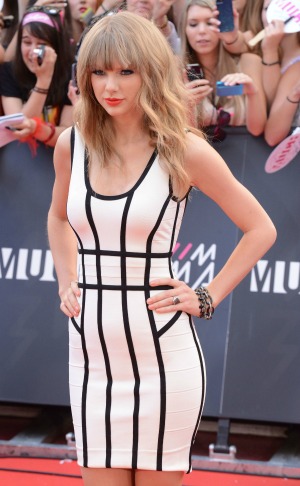 You don’t want to mess with Taylor Swift, or you may get a song that is all about you!

In fact, the singer has dated a string of famous men, including Taylor Lautner, Jake Gyllenhaal, Harry Styles and John Mayer, who all appear to have been no good for her!

The We Are Never Ever Getting Back Together hitmaker has gone as far as to say that her ex-boyfriends have been some of her “biggest regrets.” Ouch, but at least she got some of her biggest hits using them as inspiration, right?

Swift revealed in the September issue of Marie Claire magazine that she keeps a “s*** list” filled with the names of her ex-boyfriends.

“Every one of my regrets has produced a song I’m proud of. ‘Love is a ruthless game unless you play it good and right,” the songstress explained.

Swift, 23, has already achieved great musical and lyrical success and admits that being heartbroken is one of her favorite emotions to inspire her prolific songwriting.

Any ideas for who Swift should date next?