The mini dome wants to communicate too with the help of a glowing egg and visions of familiar faces. The clues are piling up, but just because we’re close to discovering what the dome is doesn’t mean the people are close to leaving. 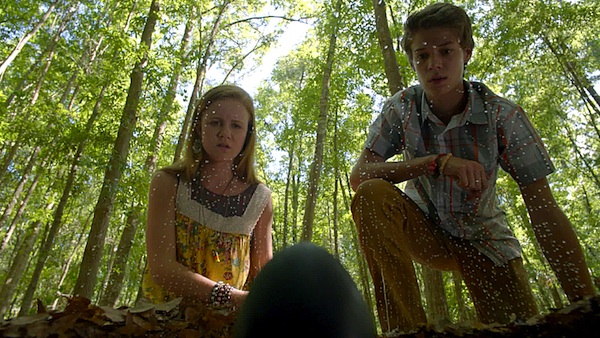 It’s nice to have a sci-fi, mystery show actually give you some answers. Under the Dome seems to be spilling secrets pretty quickly. We’ve already discovered the egg at the center of the dome. We know the dome seems to be protecting the people and trying to communicate. It also has something to do with the kids. Not that we know everything, but it feels close. Especially after this week and the “monarch” clue we receive.

At the start of the episode, Big Jim wakes up to hear a noise in his house. He grabs his guns and investigates, only to find Junior. Big Jim accuses Junior of acting just like his mother did at the end of her life. He disowns him as a son and kicks him out. Again.

Big Jim shows up at the diner where Joe and Angie are looking for food. Angie accuses Big Jim of not keeping his word because Junior found her last night even though Big Jim said he would keep her safe. Angie wants to reopen the diner, and Big Jim says he’ll help as best he can.

Linda and Barbie (Mike Vogel) find Junior picking out a gun at the station. Linda puts him on probation and won’t allow him to have a weapon after what happened with the Dundee brothers.

Big Jim arrives at the station and fills Barbie and Linda in on the situation with Ollie. He wants the police to seize Ollie’s land, but it doesn’t go as planned.

Ollie and his gang of farmers show up in their old Chevys with rifles and tell the police they need to leave. The police are outnumbered. After shooting one of the officers named Carter in the kneecap to prove a point, Ollie tells them to get off his land. 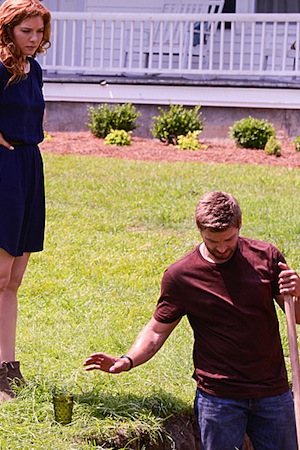 Norrie thinks bad things happen with she and Joe are together and wants nothing to do with him anymore.

Joe slips and accidentally tells Julia about the egg.

Joe takes Julia to the mini dome. When they arrive, they see the egg glowing. Julia touches the second dome and sees a vision of another Joe who says, “The Monarch will be crowned.” Joe is worried that because Julia saw him, something bad will happen to him.

Big Jim wants to take the well by force. Barbie says if they can destroy Ollie’s well and reroute the water, they will avoid violent confrontation with the farmers. Big Jim wants to make an example of Ollie and won’t hear of Barbie and Linda’s plan.

Back at the farm, Ollie tells Junior his mother wasn’t in a simple car accident. She committed suicide. Junior says he wants to be the one to kill Big Jim.

The gunfire begins on Ollie’s land and one of the farmers finds Barbie trying to destroy the well. Barbie gets the upper hand and knocks the guy out. He manages to blow up the well.

Phil is shot in the scuffle.

Junior is able to get the upper hand on Big Jim. With rifle in hand, Junior demands to know about his mom, and Big Jim admits it wasn’t an accident. Big Jim explains she killed herself after the two got in an argument one night. Duke helped Big Jim cover up the suicide. Big Jim lied because he didn’t want Junior to know his mom chose to leave him.

Barbie’s plan works, and the town has a reservoir again. Barbie knows Big Jim wanted the well so he could control the town.

Junior returns to the town and tells Linda he was just pretending to be a traitor — like the Trojan horse story.

Norrie and Joe reconnect, and she apologies to him. Norrie decides it’s time to bury Alice.

Angie watches the ceremony from the terrace, and we see she has a monarch butterfly tattoo on her shoulder, which alludes to the statement, “The monarch will be crowned.”