One Direction’s Zayn Malik raised a few eyebrows earlier this year when he tattooed his girlfriend’s face on his arm. Perrie Edwards is all about it, though.

We’re all familiar with the Golden Rule of tattoos: Never, ever, ever, ever tattoo someone’s name on your body, even if you love them and think you’ll be together forever. It’s the relationship kiss of death. 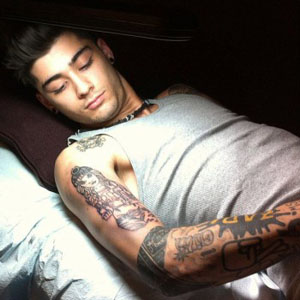 Apparently One Direction star Zayn Malik hasn’t heard of that, though. The singer tattooed girlfriend Perrie Edwards’ face on his upper right arm earlier this summer — and she loves it!

“It must be love to be honest,” the Little Mix singer told omg! at the 2013 Teen Choice Awards. “When I’m away from him, I guess he can just take a look at his arm and remind him of me. So it’s a lovely compliment really. I love it, it’s lovely.”

The pair has been dating since 2011, but what happens if they break up? Now that will be an awkward conversation.

Harry Styles reveals how many women he’s slept with >>

It all started when the British game show host chided Horan for being the only member of One Direction without any ink. The comedian challenged the singing star to tattoo a picture of Corden’s face — and Horan accepted!

“You should put it on my arse!” he joked.

So, they did — and it stayed on longer than any temporary tattoo we’ve ever had.

“We tattooed it on to his left buttock — it took him three weeks to get rid of it,” Corden joked. “He sent me updates every week, with a photo of my fading face on his arse saying, ‘It’s still not gone yet.'”

Horan had a good sense of humor about it, tweeting Monday: “What ya think of the pic of my arse and @jkcordens face?”

Corden is obviously pleased to have his face so close to a star’s butt. “You love it Niall! I think you should get it done permanently!” he shot back.