Seth Meyers jokes that his wife-to-be only asks “courtesy questions” when it comes to planning their upcoming wedding. Should a guy always be involved? 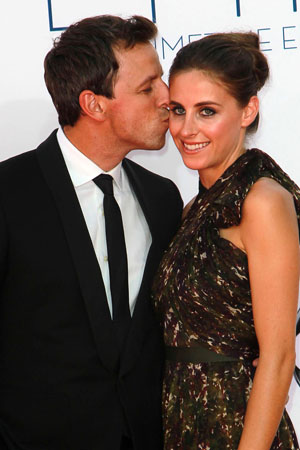 It’s obvious that former Saturday Night Live star Seth Meyers is excited about getting married. However, the actor — who proposed to girlfriend Alexi Ashe earlier this summer — recently told Jimmy Fallon that he’s staying away from the wedding-planning process.

“Every now and again, she’ll throw me a courtesy question,” Meyers joked to Fallon. “‘Do you think the invitations should have seashells or lighthouses?’ I’ll be like, ‘Seashells?’ And she’ll be like, ‘Not lighthouses?’ I’m like, ‘Don’t ask me if there’s a right answer!’ She’ll have to make it easier for me. Like, ‘You either get to have lighthouses or rattlesnakes.'”

It’s obvious that Meyer is joking, but it seems like many men try to stay away from anything related to wedding planning before the big day. Shouldn’t it be a joint process, though — especially since it’s supposed to be the most important day of your lives?

Not necessarily, according to one expert.

“The process of planning a wedding might best be thought of as an opportunity for the bride and groom to exercise their ‘decision-making and compromising muscles.’ As players on the same team, both views must be equally considered,” Dr. Deborah Hecker, psychotherapist and divorce expert, tells SheKnows.

But, does one side’s unwillingness to help with the wedding planning foreshadow problems for the future? No, says Dr. Hecker.

“Let’s be honest. The day of the wedding is just a big party,” Dr. Hecker says. “What really matters is that two people are engaged in a significant turning point in their lives and need to get off on the right foot as a strong couple.”

It’s best to just let your husband-to-be off the hook if he doesn’t want to be a part of the planning process.

“If the groom experiences his involvement in the wedding plans as a dreaded exercise and thinks that his only responsibility for the wedding is to show up, and [if] his bride-to-be is on board with that arrangement, they have a win-win situation,” Dr. Hecker says.

But, what if he wants to help arrange the guest lists and choose the flowers? Consider it an opportunity to practice your negotiating and teamwork skills before walking down the aisle.

“They must be prepared to jointly flex their ‘conflict-resolution muscles’ if the wedding planning euphoria should descend into chaos, which we know can happen in a New York minute,” Dr Hecker says.

Do you think men should be heavily involved in the wedding planning process? Sound off below!

More on weddings and marriage