Fergie shows off her growing baby bump in a skintight sexy dress. 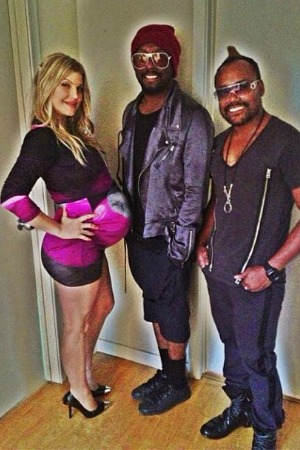 Fergie is a lady who has apparently decided that she isn’t going to let the little fact that she’s eight months pregnant put a damper on her style. At a recent event, Fergie posed with her fellow Black Eyed Peas founding members will.i.am and apl.de.ap for a photo that the singer posted to Instagram.

Despite the fact that he still hasn’t made his appearance in the world yet, Fergie’s son certainly made his appearance known in his momma’s skintight dress. Looking like she could be ready to pop any second, Fergie showed off her impressive baby bump in the photo. The dress had a bright pink design that seemed specially made to highlight Fergie’s pregnant belly, which could be one reason why she looks especially large in the picture.

Fergie and Josh Duhamel are having a boy! >>

Fergie and husband Josh Duhamel can’t wait for the arrival of their little boy. So far, they haven’t revealed the baby’s name, but recently the soon-to-be-parents had fun with their fans about it. Fergie posted a picture with a sign in front of her stomach that said “Say My Name,” while Duhamel urged fans to weigh in with name suggestions on his Facebook and Instagram pages.

The couple recently went all out for their baby shower, where everything was decorated in teal, black and white and guests drank through black-and-white striped or polka dot straws and ate from a huge teddy bear cake. Guests for the party included Kelly Osbourne, Matthew Mosshart, Julianne Hough, Ru Paul, Lance Bass, Molly Sims and Gabriel Aubry.

Daddy-to-be Duhamel recently admitted that his wife isn’t the only one sporting a growing “bump” in the family. Apparently his tummy is growing a little bit, too. “She eats a lot healthier than I do. I think I’ve probably put on more weight than she has,” Duhamel said.