Taking on a teen franchise like The Hunger Games can make you a household name overnight, but as for Jennifer Lawrence, she will be happy when she is no longer in the spotlight. 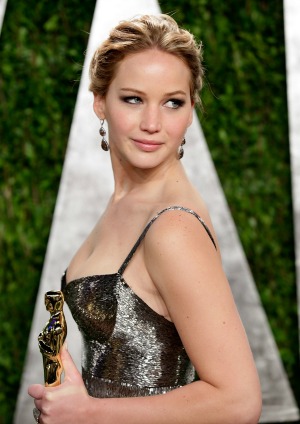 Jennifer Lawrence is one of the biggest movie stars in the world, but it was only a few years ago that she was still a struggling actress. The 23-year-old decided to pursue her passion at the age of 15, and it changed her life.

“I know it sounds so stupid, but it was kind of like I finally found something people were telling me I was good at, which I had never heard, ever,” she told Vogue for its September issue. “And that was a big reason why my parents let me do this.”

Lawrence said the acting classes made up for another “activity” she had been involved in.

She remembers, “One time, my mom was on the phone with my dad, saying, ‘We’re paying for therapy and all this medication, and we don’t need it when she’s here. She’s happy.'”

Lawrence may be best known for her part in The Hunger Games franchise, but she won her Oscar for Silver Linings Playbook. Since “making it,” Lawrence has hired her best friend as her assistant, which she said is important to keep her grounded.

“I’m still doing what a 23-year-old should be doing, which is hanging out with my friend and being normal,” Lawrence explained. “I still have to put the dishes away. And I still have to listen. When you’ve been doing press for a very long time, you talk about yourself constantly. My biggest fear is that I’m going to take that into the real world.”

In fact, the actress isn’t yet used to the attention her job has brought her. She understands how important it is to remember who she really is, because she knows fame may not last forever.

“It’s just that I’m still getting used to everything. It still makes me a little emotional, just to see how quickly everything kind of changes… that it changes so fast,” Lawrence said. “So I’ve kind of been a big homebody lately. But I think eventually, one of these days, I guess when the next franchise starts and I’m not in it, and the new Jennifer Lawrence is born, then I’ll be able to go outside.”

The Hunger Games: Catching Fire will be out Nov. 22.