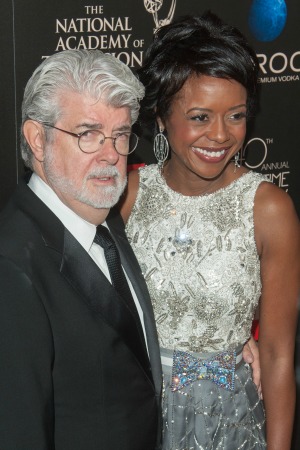 George Lucas and his wife, Mellody Hobson, have announced that they welcomed a baby girl on Friday, Aug. 9. The Huffington Post reports that the new little girl is named Everest Hobson Lucas and is the first biological child for both Lucas and Hobson. Little Everest will have plenty of siblings to play with, though, as she joins Lucas’ adopted children: 32-year-old Amanda, 25-year-old Katie, and 20-year-old Jett.

Obama awards Medal of Arts to George Lucas and others >>

The 69-year-old Lucas became engaged to 44-year-old Hobson back in January, and the couple were married on June 22 at Skywalker Ranch. The wedding was officiated by Bill Moyers, and director Steven Spielberg was there to toast the groom.

That’s just seven months from engagement to marriage to baby — this power couple certainly doesn’t mess around. But when you’re as busy as Lucas and Hobson, you have to do things at a faster pace. Hobson is chair of Dreamworks Animation, serves as president of Ariel Investments and is a financial contributor with CBS. As for Lucas, he sold his production company, Lucasfilm Ltd., to the Walt Disney Company last year for $4 billion.

Could this mean that Lucas is going to be a stay-at-home dad for little Everest while mommy goes out to work every day? How cute would that be?

One thing is for certain: With parents as powerful as Lucas and Hobson, Everest is going to grow up as Hollywood royalty. Maybe little Prince George will marry “Princess” Everest one day. Talk about a fairy tale!