Chloë Grace Moretz is only 16, yet she is wise beyond her years, showing an emotional and professional maturity that has impressed her older co-stars. 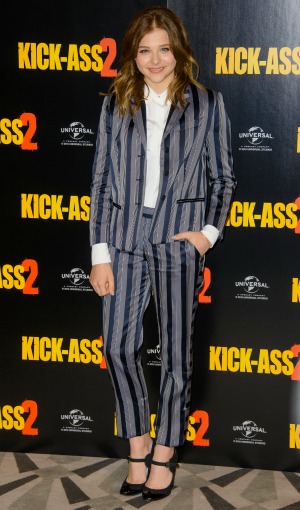 Chloë Grace Moretz is the picture of innocence, but the 16-year-old actress is wise beyond her years and emotionally mature. The young actress must also be a good listener and a trustworthy person, because according to her, older co-stars often confide in her about their personal problems.

While Moretz has never been in a relationship, her emotional maturity allows her to discuss marital problems with her co-stars, regardless of her lack of direct experience with the topic.

The Kick-Ass 2 actress told The Guardian newspaper, “I work with a lot of older actors and they all seem to want to talk to me about their marital problems. And I’m always like, ‘Wow, that sucks. I’m sorry!’ I mean, my mom and dad got divorced — I’ve been through a lot at a young age so I’m good at conversing at length about it.

“It’s definitely weird,” she continued, “but I don’t find it inappropriate. It’s just funny to be discussing it when I haven’t ever been in a relationship.”

Moretz has starred in several films, and her emotional and professional maturity has enabled her to choose a variety of roles, thus ensuring that she does not alienate her fan base or typecast herself.

“When you do a lot of kid movies, that can be a problem,” Moretz said. “You were a little sister type, and then all of a sudden you’re a prostitute, and people don’t like it. Unless, like Jodie Foster, that’s how you start off.

“And I’m similar because the first time anyone really saw me was in Kick-Ass, killing people. So I don’t think I’ll have that kind of trouble. I guess maybe we veer towards darker roles because we want to stretch ourselves.

“I’m a well-rounded girl from a normal family — I’m not a psychopath. So it’s fun to be those characters that have all these dark undertones, because it’s just acting. Otherwise I’m just playing myself, and I do that every day.”

In fact, the young actress has spent most of her life in Hollywood, but she insists that fame has not caused her to sacrifice her youth.

“I’ve been able to live in London for three years, go to Berlin, go to Bora Bora… go to all these crazy locations and I’m only 16. So I feel my childhood has honestly been a lot more immense than most.”

It sounds like the young actress has her head firmly on her shoulders, so let’s hope she doesn’t turn out like fellow child actresses Lindsay Lohan and Amanda Bynes!