Cory Monteith, who starred as Finn in Glee, will sadly not be in the latest season due to his untimely death. The cast really miss his presence on set. 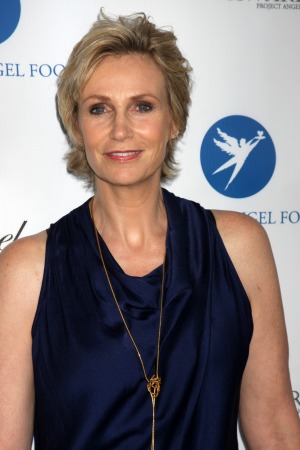 Jane Lynch is back on the set of Glee and is feeling emotional because the late Cory Monteith will not be joining her.

Lynch and the rest of the Glee cast — including Monteith’s girlfriend of 14 months, Lea Michele — have returned to work since the tragic passing of their co-star. Montieth died on July 13 from an alcohol and heroin overdose.

Lynch appeared at the Angel Awards in Hollywood on Saturday, Aug. 10, and she revealed to Us Weekly, “Everybody’s doing differently. You know, it’s tough.”

“Everybody had a relationship with him and we all express our grief in different ways so I’ll only speak for myself,” she said. “I love him and I honor [him], and every day I go to work, I walk by his trailer and I go, ‘He should be in there.'”

The cast honored their late co-star at a special memorial in Los Angeles last month.

The 53-year-old actress added, “We had a nice memorial. The cast and the crew, we all got together and we remembered Cory and honored [him].

“We went back to the work and the wheels turn in spite of what happened and I’m just glad we had that memorial so we were able to come together and be a family.”

The eagerly anticipated fifth season of the hit series Glee will certainly be missing something, but it will also remember Monteith’s character, Finn, fondly. In fact, it has been reported that show co-creator Ryan Murphy will get help from Lea Michele in writing a special episode that will deal with the dangers of drug abuse.