True Blood remembered the times this week through Terry’s funeral. A nice little episode that brought us back to the roots of the show and a little added blood, of course. 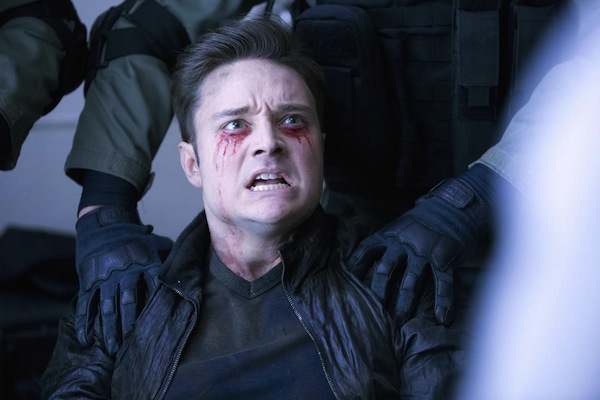 We’ve known since the season premiere of True Blood that a major character in the show was going to die. At first, we weren’t sure what they were thinking axing Terry who was such a great staple character on the show. After this week’s episode, his demise seems fitting. The show definitely doesn’t let him go lightly, which we appreciate. Mingled in with the juicy plot details of this episode, we feel satisfied that True Blood will wrap this season up with a bang. Pretty sure the hits aren’t done coming just yet.

Sookie (Anna Paquin) gives Warlow her blood and then uses her light to expel Bill (Stephen Moyer) from the faerie plane. She breaks their deal because of what Eric (Alexander Skarsgard) did to Warlow. Warlow needs to heal before Bill uses his blood.

Bill heads to Vamp Camp to figure out a plan B and realizes Eric has beaten him to the punch. He finds all of the Vamp Camp soldiers at the entrance slaughtered. Inside, Eric lets all of the vampires go and instructs them to kill the humans who took them. The vampires are more than happily to oblige. Eric also finds Jason lying shirtless on a table. Jason tells Eric that the officials took Tara, Jessica, Pam and the others.

Eric and Jason race to find their friends and end up finding the psychologist first. When Eric says he intends on killing the man, the psychologist tells Eric he slept with Pam as a way to taunt him. It backfires. Eric drags the man on their hunt to find the others. Eric’s going to allow Pam to kill him herself.

Saying goodbye to an old friend

Back in Bon Temps, it’s the best funeral True Blood could have offered for Terry.

Mingled between scenes of Eric and the other vampires rampaging Vamp Camp, Sookie, Arlene, Andy and the others say goodbye to Terry. There are nice flashback moments as the characters recount their favorite Terry stories. (Andy finds him in the middle of the forest. Sam tells of the moment when Terry let the catfish go and the two decided they liked each other. Sam decided to give Terry the job at Merlotte’s. Even Sookie tells a tale of first reading Terry’s mind and discovering he was in love with Arlene the second he saw her.)

Arlene decides that the military sendoff wasn’t as disturbing as she originally thought, and Terry’s body is laid to rest.

The vampires meet the sun

Back at Vamp Camp, Sarah manages to escape the killing rampage by going to the top of the roof. She pulls open the sunroof where our vampire friends are being held. Bill is below allowing all the others to feed on him. He drank a vial of Warlow’s blood, and therefore has protected all of them from the sun by sharing the wealth.

Eric makes sure Steve doesn’t get any blood. Before Newlin dies, he professes his love for Jason and then explodes into a pile of blood.

The others are too high on blood to notice how weak Bill is from blood loss. He begins seeing visions of Lilith, who calls for him to pass on because he’s fulfilled his purpose.

Jason tracks down Sarah and holds a gun to her head. In the end, he decides not to kill her. This moment is mingled in with a sweet song at the funeral from a man named Big John called “Life Matters.”

The vampires in the sun destroy the infected Tru Blood.

Jessica realizes Bill is still inside and goes to find him. She gives him her blood and heals him before Lilith can convince him to die. When he joins the group outside, he’s hailed as a hero. The vampires head to Bill and Jessica’s house to party.

She turns to find Eric. She begs him not to leave her, but he flies into the sky.

Could Eric be gone for good?