Jennifer Aniston wanted to do something nice for her fiancé, Justin Theroux, this weekend, so she threw him a star-studded birthday party to celebrate his 42nd year. 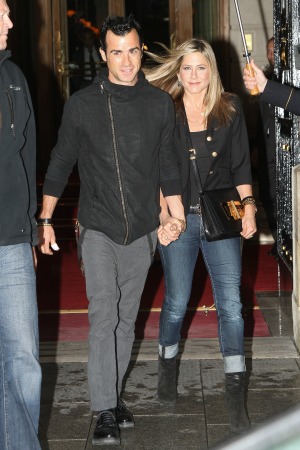 Some tabloids thought Jennifer Aniston was secretly getting married to fiancé Justin Theroux this weekend. Instead, it turns out the weekend’s big event was a big birthday bash for the 42-year-old actor and screenwriter.

The couple’s new Bel Air mansion was filled with celebrity pals on Saturday night. The renovated home reportedly cost them a hefty $21 million.

A source told Us Weekly about the big evening, including the pre-party beauty preparations for the ladies. Aniston’s longtime hairdresser, Chris McMillan, styled the We’re the Millers star for the event.

As for the guys? Well, they chilled out while the ladies got ready.

The sources revealed, “Several of Justin’s friends spent the afternoon at the house hanging out by the pool with him and celebrating his birthday. It was a relaxed afternoon and they were all in the cabana area having drinks and listening to music like Kanye West and The Kinks.”

The couple kept it casual with their friends by serving a barbecue buffet while their guests “dressed casually in jeans and T-shirts.”

Us Weekly reported that the 44-year-old actress stuck close to Isla Fisher and Tobey Maguire’s wife, Jen Meyer, most of the evening. Theroux had talk show host Jimmy Kimmel and Parenthood star Dax Shepard by his side.

One notable absentee was longtime BFF Courteney Cox. According to TMZ, the actress was vacationing in Cancún, where she slipped and fell. Cox had to charter a private plane back to the U.S. to attend to her broken wrist.