The View said goodbye to another host as the show continues to undergo dramatic changes. On Friday, Joy Behar exited after 16 seasons. 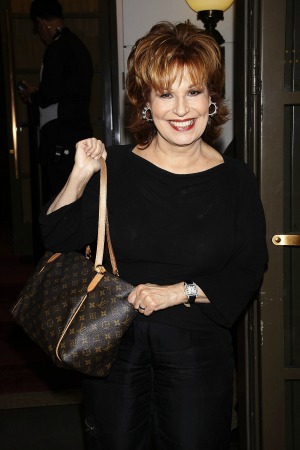 On Friday, Joy Behar said goodbye to The View, a show she helped launch back in August 1997. The only original member of the Hot Topics panel left is Barbara Walters who is set to retire in 2014.

Behar’s last day wasn’t marked by tears, but it was a day of celebration for the comedienne.

The final show was taped a week ago with celebrity guests including Meredith Vieira, Joan Rivers, Alan Alda and Regis Philbin. Tony Bennett also performed to honor Behar in song with Frank Sinatra’s “The Good Life.”

Is Hoda Kotb being eyed for The View? >>

The 70-year-old took to her Twitter page on Thursday morning to alert the viewers that tomorrow was the big day.

The producers shared highlight clips of her time on the show including memorable moments like walking out on her interview with Bill O’Reilly and talking with President Barack Obama. Other celebs like Jane Lynch, Steve Martin and Carol Burnett sent well wishes in pre-taped segments.

Behar made sure to thank the important folks on the show including “hair and makeup people” as well as the publicists, crew and producers.

She also took the time to thank her co-hosts with whom she has laughed, fought and has cherished over the years.

The host shared, “I was born an only child, but now I know what sibling rivalry is all about.”

Her final goodbye was to Walters who created The View. She referenced a feud the newswoman had back in the 1970s with 60 Minutes journalist Harry Reasoner when they were working together at ABC News.

However, it was Walters who got the last word in to her quick-witted co-host.

She said, “I don’t know what you plan to do with your time but whatever you choose it will be smart and provocative… I love you, Joy. I love every moment we’ve had together… Thank you. We are really going to miss you.”

Behar announced in March that she was leaving the show after 16 seasons. No replacement has been revealed, but Brooke Shields is considered the front-runner for the position.