Jimmy Fallon opens up in an interview and reveals that his newborn daughter was born via a surrogate. 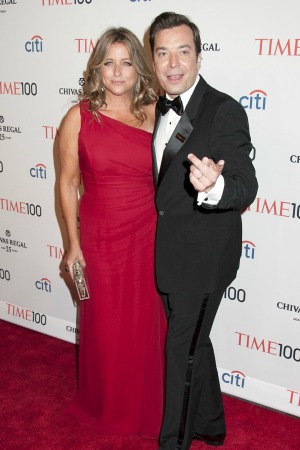 Jimmy Fallon has had a lot of surprises for his fans recently. First came the surprise that he and his wife Nancy Juvonen had welcomed a new baby girl into their family. For months Fallon had been making jokes about the imminent arrival of the royal baby, but not once during that time did he mention he was becoming a father himself.

Now we may know why he and his wife were so secretive about the pregnancy. It turns out that the couple had little Winnie Rose via a surrogate. Fallon spoke about their struggles to have a baby in an interview with the Today show.

“My wife and I had been trying [for] a while to have a baby,” Fallon said in the interview. “We tried a bunch of things — so we had a surrogate.”

Fallon and his wife just wanted the whole thing to be a surprise. “We said, ‘We’re not going to tell anybody,'” Fallon revealed. “It’d be just more fun if it’s just private between me and my wife. And then we get to introduce her to everybody.”

But the surprise was almost too big. When Winnie was born, Fallon said he and his wife were in a bit of a panic at first. “When it happened we were shocked and were like, ‘Who do we tell? Who’s going to be mad at us if this gets out?’ And we had to start calling everybody.”

Little Winnie made her debut just one day after the royal baby and the anchors had a lot of fun with that, even going so far as to give Fallon an adorable pink onesie that said “Born to Rule” on it.

The entire interview with Fallon is due to air next week and promises to have a lot of heartwarming moments as the new dad talks about his baby girl.