Breaking Bad premieres Sunday, and Honest Trailer is celebrating with its trademark epic-movie-voice guy and a whole heap of sarcasm. Ring in your weekend properly with a few of our favorite Honest Trailer videos. (Warning: Only proceed if you have a sense of humor. These trailers contain humor that is at times inappropriate, envelope-pushing and LOL funny.) 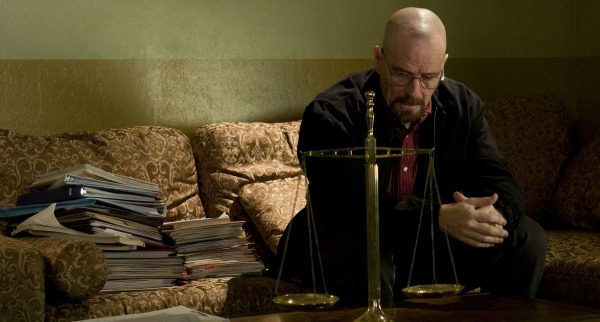 Holla! All you Breaking Bad junkies are giddy for Sunday’s premiere and who can blame you? This addictive adrenaline rush showcases the underbelly of meth production, cancer, marriage, insanity — there’s a little something for everyone. To celebrate your countdown to Sunday, Honest Trailer whipped up this little gem for you.

If you ever thought that the Grown Ups movies were little more than a big pile of wasted comedic talent (we haven’t met the two people who don’t think that), Honest Trailer’s got your back. We’re still trying to figure out who thought the first Grown Ups was a good idea. Then they made a second one? As a sidenote, let’s see a show of hands from the people who are sick of these guys casting the hottest women on the planet as their girlfriends and wives. Yeah, that would happen.

Hell, yeah! Tired premises are alive and well, and nothing can bring a cliché blockbuster to its knees like a little biting sarcasm. That’s where our friends at Honest Trailer come in. Independence Day is fast becoming one of those movies like Dirty Dancing and Top Gun that we watched more times than we care to admit. Then we grew up — and nearly gagged on the cheese.

Les Miserables or Muy Misererable? After watching this darling of the Academy Awards, we were left with several questions. Who forgot to pay the light bill? Who thought Russell Crowe could sing? Why is Hugh Jackman unattractive in at least half of the movie? Can I have my 2-½ hours back? Thankfully, Honest Trailer is here to address those and several other oddities about this movie (that everyone thought, but no one really had the guts to say).

“So wait, he wrote her hundreds of letters, but couldn’t just call her once?” Bah, ha, ha. This is just one of several hilarious observations Honest Trailer makes about The Notebook for the few gals who thought the movie was just a little toe-curling and cringe-worthy. We know it probably breaks some obscure girl code rule to admit The Notebook isn’t our favorite movie of all time, but at least Honest Trailer feels our pain.

Get all the latest Hollywood news! Subscribe to our newsletter >>