If you want to see Lady Gaga in the nude, you don’t have to look much further than her latest video collaboration with Serbian artist Marina Abramovic! 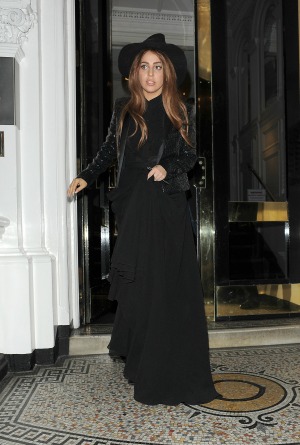 We have more news about Lady Gaga. It seems the pop icon is unstoppable when it comes to creativity and bizarreness…

This may not be the first time that the Born This Way singer has bared her flesh, but she most certainly took it to an entirely new level when she decided to partake in a video to support the Marina Abramovic Institute.

The 120-second video clip, titled The Abramovic Method Practiced by Lady Gaga, shows the singer in a number of different settings where she makes a continuous groaning sound while performing the Abramovic method.

The method, according to reports, was designed to ”heighten the participants’ awareness of their physical and mental experience in the present moment.”

In fact, it gets a little weirder as Gaga remains blindfolded throughout the majority of the video, only occasionally posing in a series of artistic and meditative poses.

At one point, Gaga can be seen surrounded by a forest, trying to grab a branch before she wraps herself around a massive crystal that is situated on a piece of laminated flooring.

You can view the NSFW (not safe for work) video below:

The campaign has been started by the Serbian performance artist Marina Abramovic, who is hoping to raise $600,000 through the donation service Kickstarter.

The reason for these donations is that Abramovic wants to fund her artworks and is currently at the $228,683 mark of her target pledged. Not doing too badly then?

The artist has even promised that everyone who donates to her fund will receive a ”personal hug.”

While the campaign is for a good cause, the love of art, we are sure Lady Gaga enjoyed being nude again since she has recently been accused by her former friends and insiders for being quite the exhibitionist.