In this episode of Burn Notice, called “Bitter Pill,” Michael and the rest of his team are put on another assignment for James and nearly lose one of their own in the process. Meanwhile, Maddie gets an unexpected visitor. 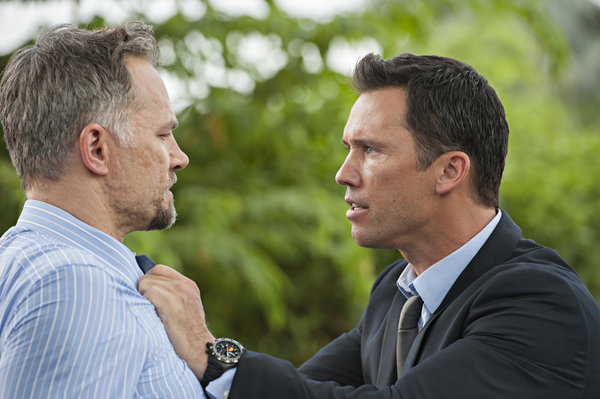 Whew! This season doesn’t show any signs of letting up, does it? I guess with only four episodes left before it’s all over (whimper), there’s no time to take the foot off the petal on Michael Westen’s story.

At the end of last week’s episode, Michael (Jeffrey Donovan) had begun to learn what kind of man James (John Pyper-Ferguson) really was. This episode took that idea and drove it home like nobody’s business. It’s almost funny to me now that, just a few episodes back, I wondered if Michael might be starting to falter in his loyalties. But come on, there was some fairly strong evidence that Michael could be wondering which was the right choice for him. James made a good case for how he was doing what he did to make the world a better place, but now there’s no denying it — the guy’s a monster.

Michael, Jesse (Colby Bell), Fi (Gabrielle Anwar) and Sam (Bruce Campbell) were all scooped up and shipped off to James without their guns or their cell phones and soon put to the task of protecting a guy named Hamed that had to live or otherwise a war would break out. Not that James cared about saving lives, he was more interested in what that war would do to his business. The team was saddled with one of James’ senior men, Snyder, and put to work. But soon the guy they were trying to protect was dying from poison.

That’s when things got ugly. Jesse and Fi manage to track down the poison manufacturer and while they were attempting to talk the antidote out of him, Snyder made an executive decision and injected the Maziq with his own poison. The plan was actually a pretty good one, until Snyder made it clear that he had no intention of letting Maziq live once he gave them the cure for Hamed. I could’ve almost forgiven him for that, but when all heck broke loose in the lab and Fi was trapped in a fire, he did something about 100 times worse.

Snyder ran off and left Fi to die and then tried to tell Michael that she was already dead. Of course Michael didn’t accept that bulls*** and ran off to find her. He fought the flames and brought her out like a real man. They got to share a brief moment of closeness when she woke up, but after that, things were bad again. James, very unhappy with Snyder’s behavior on the job, shot Snyder in cold blood in front of the whole group. The look on Michael’s face said it all — James is going down.

But what Michael doesn’t know (yet) is that James actually made a little visit to Maddie (Sharon Gless) and offered her protection. I couldn’t quite figure out what she needed protection from, but I guess we’ll find that out in the next few episodes. I think I’d better start trimming down my nails or otherwise I’m going to be tempted to chew them off as this series gets closer to its finale.

Michael finding out that Sam, Jesse and Fi had all been gathered up by James, too.

Michael and Sam acting as a personal security team. I loved how they totally looked like secret service agents.

“Just one more hour and I’ll buy you all the crab cakes you want.”
“Fair warning, that could get pricey.”

Sam and Snyder screaming at each other over who had the better idea about how to solve their little problem.

“The right approach? How about a gun to his head?”

“This is a tough gig.” — Poor Jesse. Not sure how he survived having to do a job in a strip club.

“Actually, I slipped in without so much as a glance.”
“That’s ’cause you’re not naked.”

Fi informing Jesse that the window wasn’t going to break itself.

“Wait, I can’t swim!”
“Then I suggest you hold your breath.”

Michael going back in for Fi. Dear Snyder, that’s how you act like a man.

The awesome way Michael cleared a way to get to Fi.

Were you expecting James to kill Snyder like that? How do you think Michael will complete his mission?