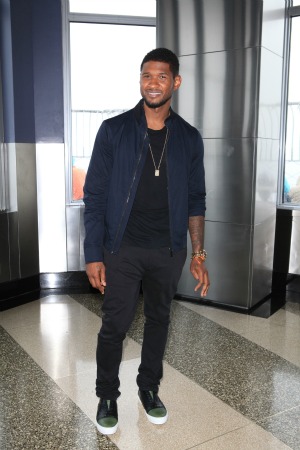 The little boy got his arm stuck in a drain at the bottom of the swimming pool, but was luckily saved and is now recovering in a hospital in Atlanta, Georgia.

The superstar singer has issued a statement, which expresses his gratitude toward the ”true heroes” who rescued his son from the swimming pool.

The child’s guardians — a maid and Usher’s aunt — were unable to free his hand and the two men who had been working at the home stepped in, freed the little boy and then gave him CPR.

In a statement his spokeswoman sent to ABC News, Usher said, ”I would like to thank my Aunt Rena as well as the doctors and nurses who are working with us around the clock.”

”I would especially like to thank the two men who saved my son’s life, Eugene Stachurski and Ben Crews. They are true heroes and I am deeply grateful to them.”

”I am blessed and fortunate to say that my son Usher V is doing well and is recovering. I am overwhelmed by the outpouring of prayers, love and support for my family’s well-being.”

While everyone is extremely happy that little Usher Raymond V is alive, one person who is extremely livid about the event is his mother and Usher’s ex-wife Tameka Foster.

Foster would like to regain full custody of her children, especially after this incident, and she has not left her son’s bedside.

A source told People magazine: ”Now that it’s sunk in, she is livid. Usher has custody and won’t let Tameka have the kids, even when he’s out of town.”

”She feels like the kids are being raised by his family or by nannies, when they should be with their mother.”

Foster has filed an emergency custody request in which she has accused Usher of “negligence and failure to properly supervise the minor child.” She also claims he uses “third-party caregivers” as much as 85 percent of each month.

What are your views on what should happen with the custody of the two little boys? Share them with us in the comments below.