Could LeAnn Rimes and Eddie Cibrian be stepping onto Brandi Glanville’s turf? It seems the couple have decided they would also like to have a reality TV show… 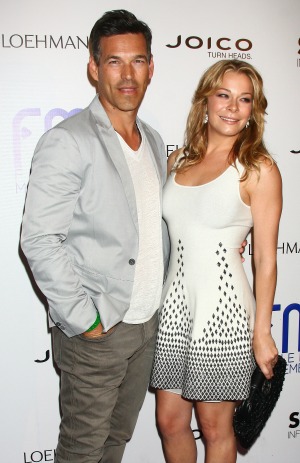 LeAnn Rimes received a lot of criticism over her affair with Eddie Cibrian — who was married to reality TV star Brandi Glanville at the time.

Well, the couple may cause even more trouble with Glanville now as they step onto her reality TV turf!

The couple met on the set of TV movie Northern Lights while they were both in relationships.

However, that did not stop their love as they embarked on a controversial affair before they tied the knot in 2011.

It has been reported that Rimes and Cibrian want the world to realize they are just a normal couple, and that was what spurred them into creating a TV series.

The pair first revealed their plans in May and will star in six half-hour episodes that will air on VH1 either later this year or in early 2014.

The singer and her actor husband released a joint statement about their forthcoming TV series on Wednesday, saying, ”We are really excited to be working together on a unique show that will give you a glimpse into who we really are or better yet, who we’re really not.”

”We’re thrilled to partner with VH1 and The Gurneys to put our spin on a project full of love, humor and music.”

Tom Calderone, the president of VH1 added, ”LeAnn and Eddie are both talented entertainers who have really captured the public’s imagination in the last couple of years, but there is so much more to them than what is in the tabloids.

”This is going to be a really fun show in which we hope to reveal what their lives are really like — from the normalcy of their home life, to what drives them artistically, to the chaos of their celebrity life.”