Russell Brand and Katy Perry’s break-up was not mutual, and it looks like he is still out to make her feel bad about falling in love with him. 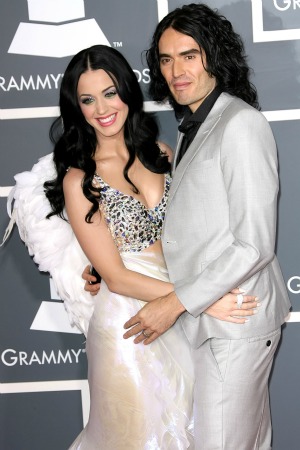 Katy Perry and Russell Brand had a whirlwind romance, and it was over almost as soon as it began. Just 14 months after the couple’s marriage in October 2010, Brand filed for divorce.

The singer later admitted that Brand broke up with her via text message, and never spoke to her again.

“He’s a very smart man, and I was in love with him when I married him,” she told Vogue back in June. “Let’s just say I haven’t heard from him since he texted me saying he was divorcing me on December 31, 2011.”

Is a baby responsible for Katy Perry and Russell Brand’s split? >>

But it doesn’t look like Brand is giving up on bashing Perry nearly two years after the last time he spoke with her. The comedian recently performed at a theater in London and he reportedly made a joke at her expense.

“When I got divorced, I considered becoming a monk,” he said, according to the Huffington Post. “When you’re a monk, you’re not allowed to have sex with anyone. When you’re married, it’s one person. That’s one more than a monk. It’s not that different. I’d be having sex thinking, ‘Think of anyone, anyone else.'”

Brand spoke with Esquire in June and elaborated on his marriage with Perry. He hinted that, at the time, there were things he found more important than his wife.

Brand may be saying he didn’t want it bad enough, but he promises he was monogamous the entire time he was with her.

Perry recently told Elle UK she has been with some “challenging men”. Having been with Brand and John Mayer may make that the understatement of the year. She has signed on to write a book about her life, and we are likely to hear much more about her life with Russell Brand.