Thor: The Dark World is upon us. Marvel Studios has unleashed a new trailer for their latest blockbuster. This fall, prepare for fantasy, action and comedy to collide. 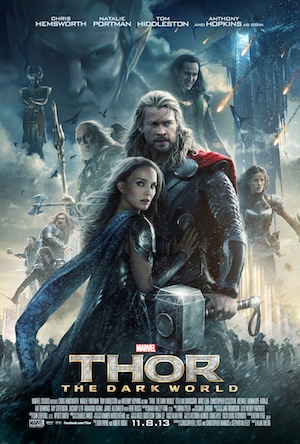 After a long wait, the new trailer for Thor: The Dark World is here. Wednesday, it premiered to millions of anxious fans. Marvel Studios gave a sneak peek to attendees at last month’s San Diego Comic-Con. The reaction was great, so we couldn’t wait to see it for ourselves.

In The Dark World, Chris Hemsworth reprises his role as the god of thunder. Following the events of The Avengers, he faces a new threat. Thor attempts to bring peace to the Nine Realms but it’s easier said than done.

There’s an ancient race led by the vengeful Malekith (Christopher Eccleston) standing in the way of Thor’s vision. Malekith wants to push the universe back to its original state — darkness. His evil is so unprecedented that even Odin (Anthony Hopkins) himself fears his wrath.

In a desperate play, Thor is forced to go to his brother Loki (Tom Hiddleston) for help. There’s no shortage of bad blood between those two. Remember, Loki tried to enslave the human race and happily killed anyone who got in his way.

Against his better judgment, Thor releases Loki from captivity. He needs him and his skills as the god of mischief to defeat Malekith. Will the duo succeed? Or will Loki betray him when Thor needs him the most?