The script for Sharknado must have left a lot to be desired as far as shark sex ed goes, judging from Tara Reid’s wild (and hilarious) theories about breeding activities. 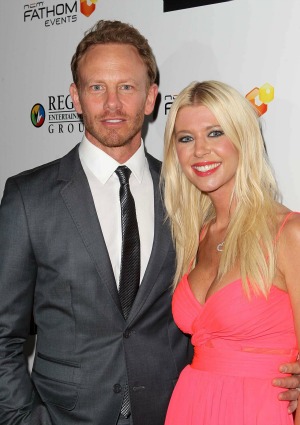 Tara Reid is once again proving the veracity of every blond joke you’ve ever heard. The Sharknado star has some, uh, interesting theories about the origins and mating habits of sharks, which she shared during her appearance on Shark After Dark last night.

“Today, I was like, all right, I don’t wanna, like, sound stupid when I do this show today, like… so I learned a little education on sharks,” she explained.

“There is a thing called whale sharks and then I realized whales are mammals and sharks are animals so they have nothing to do with each other! So basically the dolphins have sex with each other but the sharks don’t, so then I thought how is it such a thing?”

Shark Week bonus! Did you know these (true) facts? >>

It gets worse, believe it or not. Reid continued, “But the difference is there is a whale shark which is the biggest shark in the ocean, he’s also scary and then you have the great white who’s also scary. There are over 400 kinds of shark but the whale shark is kind of interesting because he’s so mean — he’s like a killer.”