Rebel Wilson chats about her most embarrassing moments, how she’s like her character on her new show Super Fun Night and what makes for a great and not-so-great night out on the town. 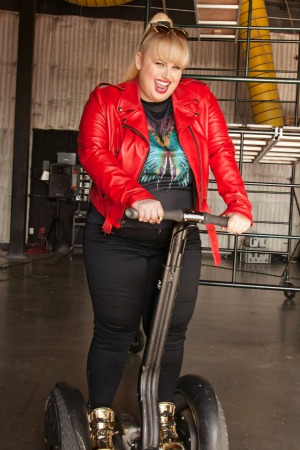 Rebel Wilson’s new series Super Fun Night premieres this fall on ABC and she’s got some advice on how to have fun. The actress recently spoke to Cosmo about one of her most embarrassing moments after coming to Hollywood, as well as her guidelines for a great night out on the town.

Adam DeVine wants to make out with Rebel Wilson (again) >>

Wilson often plays characters on-screen who get themselves into pretty awkward situations. Turns out she uses her own life as inspiration, including for a scene in Super Fun Night. “I’ll often use my real stuff in my writing because it comes across as more authentic,” Wilson said. “There’s a scene where my dress rips, and something like that happened when I first came to America. I got set up on a lunch with Jason Segel. He was the first Hollywood person that I got to have lunch with and chat about life with or whatever . So I thought, I’ll try to look my best, and I wore my best leather jacket. When I sat down, a sharp edge on the chair snagged my jacket, and it just ripped. I was devastated but trying to hide it because I didn’t want to ruin the lunch. I’m always ripping clothing. It’s so embarrassing.”

She and her character on the show have more than a few things in common, including how they approach men. “My character on the show and her friends are kind of dorky and socially awkward. And even though, yeah, now I’m in movies or whatever, I am still that girl. People think you’re really confident because you’re an actress or whatever, but I’m like the worst. Although the good thing about being recognizable is that people approach me, which is good. Also, I watch that show Millionaire Matchmaker, and they say the girl should never approach the guys,” Wilson revealed.

When asked what activities she would categorize as not fun, Wilson rattled off some quick answers, including:

“Trying on bikinis at a shopping mall.”

“Entering novice fight tournaments (if you get punched in the face, you’ll instantly see why this is not fun.)”

“Eating at an unlicensed food truck. As a rule, carefully vet all street-meat options ahead of time.”

“Going out to any place you think you won’t get in. Exclusivity and/or overcrowding is not Super Fun. You don’t want to go there anyway. Stuff them!”

She also had some great suggestions for what do to if you wanted to have fun night out, including:

“Sportswear. If there’s a sudden need for a burst of cardio (e. g. running away from someone you really want to avoid), at least you’ll be ready.”

“Draw attention to your best assets. Don’t be afraid to use a strategically placed LED light to point the way.”

“A high ponytail. It looks banging. It keeps you from overheating, and it looks mad cool in head-swinging dance moves.”