Stephen Colbert and a few of his celebrity friends, including Hugh Laurie, Bryan Cranston, Matt Damon, Jeff Bridges and Jimmy Fallon join him in rocking out to Daft Punk’s “Get Lucky.” 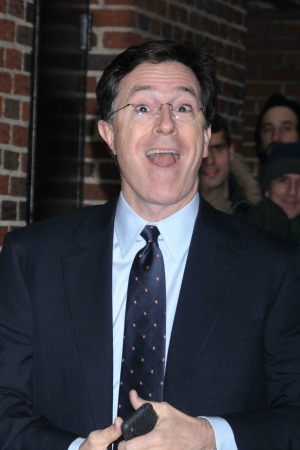 Stephen Colbert sure knows how to take lemons and make lemonade — metaphorically speaking. Daft Punk, the helmet-wearing French duo known for electronic music, was scheduled to appear on Colbert’s show this week. Unfortunately the band had to back out due to a conflict with Viacom over an already scheduled performance at the upcoming VMAs.

Most hosts might have just given their audience a quick explanation about the fiasco and moved on to other guests. Not Colbert. Instead he worked in a way to use the incident as part of his annual summer concert series that he has dubbed “StePhest Colbchella ‘013.”

Jumping out from behind his desk, Colbert began some righteous dance moves as Daft Punk’s latest hit “Get Lucky” began playing in the studio. The audience quickly jumped up to join the host (except for some very uptight people in the front row) as he danced away.

The fun didn’t stop there. In a series of clips, Colbert continued his celebration with a bunch of his celebrity friends. First up was a short dance routine with House star Hugh Laurie, followed by a stair dance with Jeff Bridges. Colbert then joined the Rockettes and proved that he can kick almost as high as they can.

Colbert then busted in on Jimmy Fallon at his studio. Fallon looked surprised to see Colbert, but decided to join in on the dance. Then came a moment that almost defies definition. Colbert danced into an interview with the cast of Breaking Bad and invited star Bryan Cranston to join him. The two are then seen roller-dancing together — Cranston in a plaid leisure suit and Colbert in shorts and knee socks. Both of them had some pretty awesome moves on their skates.

The dancing got wilder and wilder as Colbert shimmied his way through Henry Kissinger’s office and ended up dancing along with Matt Damon, who was busting out his own moves in something called the Matt Damon Booth.

Check out the video below to see all the fun.