Mark Wahlberg has some advice for Justin Bieber: If you want to keep your career going past the whole teen idol thing, you’d better get your act together. 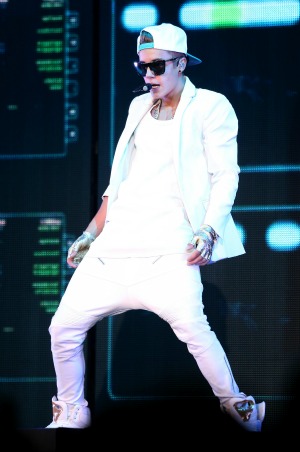 He transformed himself from jailbird to shirtless rapper Marky Mark to serious Hollywood heavyweight Mark Wahlberg — and if Justin Bieber wants to maintain his success over decades like he has, then the bucket pee-er had better straighten up his act.

In a chat with the U.K.’s Sun, Wahlberg dispensed his priceless (and unsolicited) advice to the young star.

“Don’t be so naughty, yeah? Be a nice boy, pull your [pants] up, make your mom proud and stop smoking weed, you little bastard,” he said.

“This career can be short-lived. You might as well be the best you can be while you’re doing it.”

Wahlberg, who grew up in a rough part of Boston alongside brother Donnie Wahlberg of New Kids on the Block and Blue Bloods, acknowledged that Bieber’s antics are nothing compared to his own before he was even famous, but said the teen’s career will only progress if he gets his act together.

“He’s a teenager living in a different day and age,” Wahlberg, who built the first part of his career on his abs and visible underwear, said. “I was in prison before I got a record, and I don’t think he’s been to prison.”

“Justin and I were talking about doing a movie, which could still happen. We have a great script that could be a vehicle for him to make his debut in movies, then maybe we could do something for the soundtrack.”

Wahlberg isn’t the only one with concerns about Bieber’s bad behavior. His own mother said she is thoroughly hurt and embarrassed that he’s acting like a spoiled brat.

“If it affects the world the way it does, imagine how it affects me as a mom seeing these headlines,” Pattie Mallette told Mario Lopez on Extra!.

“And we talk and he knows what I think… I definitely am a mom first and I care deeply about what how he is feeling and what he is going through.”

Sounds like mom and Marky Mark need to tie Bieber to a chair and make him listen to his own music until he agrees to behave himself.