Kelly Osbourne wasn’t always the confident, responsible person she is today. She says her mom did all she could to help her fight her drug addiction, but that isn’t why she eventually gave it up. 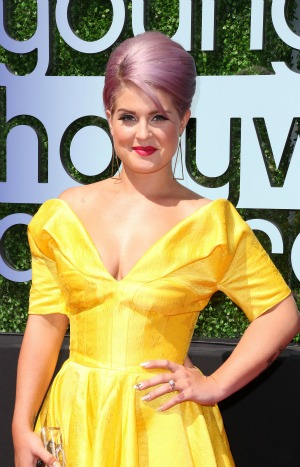 The Osbournes have never exactly been a normal family, and Sharon Osbourne has never been a normal mom. But no one can question that she loves her kids, and will do anything to protect them.

Sharon’s daughter Kelly Osbourne has become a fashion icon as the co-host of Fashion Police and is about to married. But her life wasn’t always headed down a smooth path, and she tells Cosmo U.K. that her mom did what she needed to get her off drugs.

“My mum even had me put in a padded cell once to scare me but, like a brat, I just sat it out until she said, ‘Well, that’s not going to work,'” Kelly said. “But what I’ve learnt is that no amount of therapy or medication is going to work unless you want it to.”

Kelly Osbourne shows off fab manicure… and her huge rock! >>

Ozzy and Sharon’s daughter told ABC News that she fell into the drug addiction because of her life in front of the cameras.

“I was sick and tired of not liking myself for no reason and believing what everyone said about me,” Kelly said. “I thought, ‘Well, if they say that I’m a drug addict… why don’t I just be that, then?'”

But the change Kelly needed came when her mom was diagnosed with cancer back in 2002. She was suddenly faced with the possibility of losing the person she calls her best friend.

“I was faced with the choice of a career or spending what could have been the last days of my mother’s life with her. I became my mum’s nurse 24/7,” she said. “She’s bloody annoying. But she is my best friend.”

Sharon Osbourne said she was proud of her daughter and the life decisions she was forced to make at the time.

“It’s a huge, huge decision and you have to be brave to go through that,” the Osbourne matriarch told ABC.

Osbourne is newly engaged (to longtime boyfriend Matthew Mosshart) and looking forward to her future, and maybe even a baby. But for now, she’s happy to be an aunt (her brother Jack also just announced his wife is expecting their second child).

She said addiction, a disease she also shares with her dad, is something she’ll fight for the rest of her life. But she feels happy with everything right now.

“I’m so lucky to have someone as special as Matthew,” she told Cosmo U.K. “I tend not to talk about relationships, because everything else is so out there and the only thing that is mine is my fiancé. The only thing I’ll say is that you will never learn what love is on any level until you let someone love you the way you deserve to be loved.”