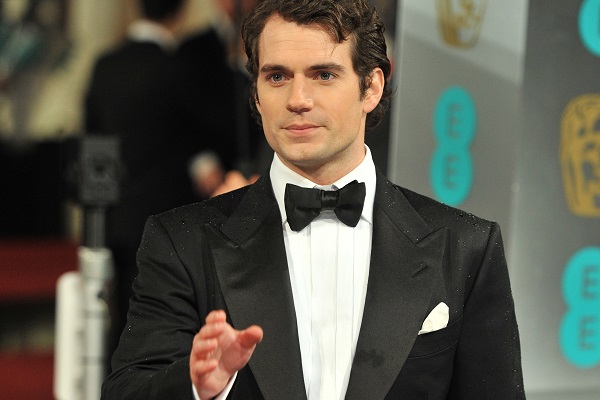 Even before he beefed up to play Superman, Cavill had a body (and face… and accent) to drool over. We’ve been oh-so-envious of his (now ex-) girlfriend Kaley Cuoco. In honor of his Teen Choice Awards nomination, we thought we’d share with you some of his most steamy moments available on YouTube. Feel free to save it for special alone time.

We found this amazing recruitment video the National Guard put together in tandem with the Man of Steel release. It contained quite a few gems. This one was one of our favorites, though. He’s really working on strengthening his legs here. You can pretend he’s kneeling to give you a ring, but we’re thinking those lunges ought to really improve stamina (for running, of course!).

Oh, sweet heavens! Another great moment brought to you by the National Guard. Come to us, Henry. Wrap those amazing arms around us. We’re fairly certain that upon running into Henry Cavill at an event, he’ll turn us into one of those girls who ask to feel his arm muscles.

We think Cavill was meant to be Superman >>

The final moment from the National Guard promo. Cavill is all clammy, sticky and sweaty from working out… or being Superman (it’s in front of a green screen after all). Here’s the thing: He probably reeks to high heaven after a workout. But we’d absolutely let him stink up our sheets.

Speaking of the bed…

Henry Cavill helped steam things up on The Tudors a lot, too. As much as we enjoyed any scene he was in, we particularly liked when he got caught with another nobleman’s daughter. With a sword to his throat, Cavill backed slowly over the bed… right where he belongs.

Eight minutes of Cavill being hot

In the process of tracking down our favorite moments, we stumbled across something amazing. Someone on YouTube went ahead and collected eight whole minutes worth of super-hot Cavill footage. Now, when you get past the six-minute mark, they may have spent a little too much time looping an image of Cavill stroking a wooden door frame but… it’s still fun to watch once or twice.

Intense, right? We worked up a sweat just watching Cavill work up a sweat. We need a shower. Someone get a Hollywood Star Map: Let’s see if we can find Henry’s!

Our newsletter is teeming with hotties! >>