Pink doesn’t care about the haters who have been sending her abuse and homophobic insults via Twitter. In fact, she thinks it’s a compliment. 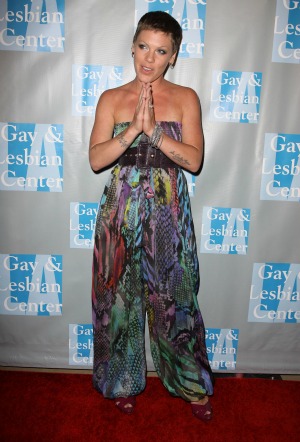 Pink has never been one to keep her mouth shut and has always spoken her mind about
what she believes in.

The singer has recently been receiving a lot of homophobic insults from Twitter users after performing with a gay pride flag at a recent concert in Australia.

Pink, whose real name is Alecia Beth Moore, is not concerned at all about the malicious tweets she has been receiving and why should she be?

The “So What” songstress has responded to the nasty tweets by writing, ”Fun fact: when you twitter me and say ‘you’re a lesbian’ it really doesn’t bother me at all. It’s a compliment. Most of my fav ppl are,”

”I’m sure all of you hate filled humans can come up with something a little worse than that?!? Come on- be creative. You have 140 characters! (sic)”

The singer has previously praised her strong homosexual fan base for being one of the major reasons behind her successful music career.

Pink told The Advocate last October, ”They’ve been the most loyal part of what I do. They’ve been my most loyal friends, to be honest. I’ve had a lot of my gay boys around, but my gay girls are my rootstalk.”

“They’re my honesty in an ocean of bulls***. I should be gay by the way that I look and the way that I am. I just happen to not be. But it just makes perfect and complete sense.”

Pink is not the only star who doesn’t let the haters get to her and is unconcerned with the remarks about her sexuality. Miley Cyrus has also recently said she is never offended when people call her a lesbian because of her new look—in fact Pink thinks Miley Cyrus new look is amazing!

Cyrus said in an interview with Toronto Sun, ”Everyone said I was a lesbian but I’m like, ‘Being a lesbian isn’t a bad thing. So if you think I look like I’m a lesbian, I’m not offended. You can call me much worse. I’ve been called much worse. Being a lesbian is a compliment more than what else they call me.”

It is about time society rethinks labels, don’t you agree?