Miley released the name of her upcoming album today. What does it mean? Your guess is as good as ours. Plus, check out a leaked sample of the title track. 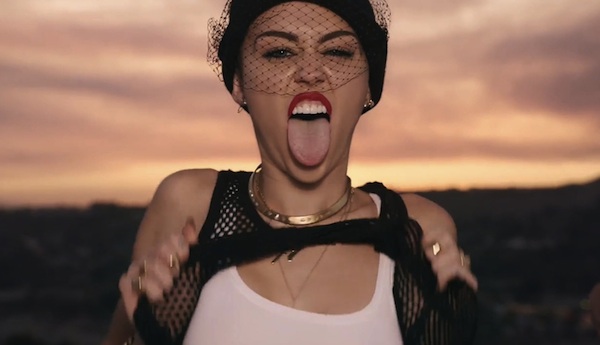 Miley poses naked on a T-Shirt >>

Well, Smilers (evidently, that’s what Cyrus’ fans are called now), Cyrus hit her goal of 13 million followers today and she has released the title of her album.

#BANGERZ? Oh my goodness, I have so many questions.

First, what’s a bangerz? Like ‘bangerz and mash’? Did you turn British all of a sudden like Madonna? Is the hashtag really necessary? Was it supposed to be “bong-ers” as a nod to your friend Snoop Lion and you misspelled it?

What does it mean?!

Oh, well, thanks for that clarification. It’s totally clear now.

Along with the title, there is a leak (ugh, again with the leaks) of nine whole seconds of the title track. The snippet is rumored to be a duet between Cyrus and Britney Spears. Ooh la la.

Cyrus and Spears are friends, and fittingly so. As Cyrus told the UK Huffington Post, Spears is the “one person in [her] life who gets it.”

“It,” we can only assume, refers to the day when you want to shave your head and attack a paparazzo with an umbrella. Spears certainly gets that.

Is Miley’s comeback thanks to Britney’s manager? >>

We have those leaked nine seconds for you. I have no idea whose voice we are hearing — Cyrus’ or Spears’, but one thing I do know, this album is going to be #BANGERZ.

What do you think of the rumored Miley & Britney duet? Is it #BANGERZ? Let us know in the comments below.