Hey, we’re not surprised Pretty Little Liars stands to snag seven surfboards at this year’s Teen Choice Awards… we think the show is totally top-notch. Here are 10 reasons we think PLL will dominate the other nominees. 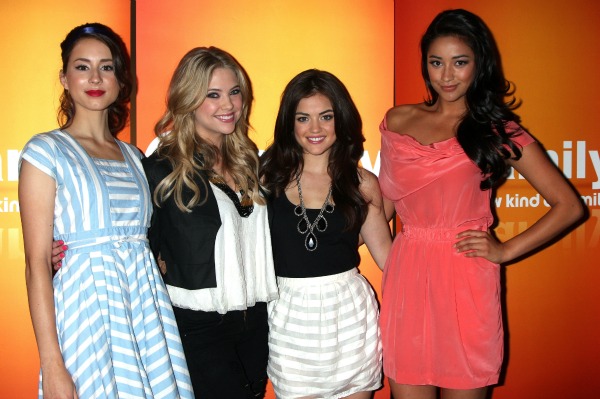 We are completely tuned in to Pretty Little Liars from the second the opening sequence starts singing, “Got a secret, can you keep it… ” And I mean tuned in — not even a natural disaster could avert our eyes from the deliciously-dark intro unfolding on the screen before us. It seems only natural then that the show would be nominated for Choice TV Show: Drama, since the first 22-seconds alone are full of it (drama, that is).

Mr. Fitz makes us want to be teacher’s pets.

They just don’t make English teachers like Mr. Fitz in real life — which is probably a good thing, for the sake of walking out of class with something other than visions of your hot instructor in your head. In addition to being dreamy, Ian Harding — who is nominated for for Choice TV Actor: Drama — has seriously stepped up the emotional depth this season.

We want to raid the Liars’ closets.

Granted, some of the outfits Aria dons are a little wacky. Somehow, though, they still work… and they make us think that maybe, just maybe, we could pull off outfits like that too. And while Gossip Girl and other shows certainly flex some fashion muscle, the Liars’ wardrobes seem more relatable and accessible to girls from many different walks of life.

Don’t get us wrong — all of the Liars are pretty funny. But no one can hold a candle to Hanna when it comes to zinging ‘em. Whether she’s talking about zombies’ inability to text, pondering why the word “abbreviated” is so long or just being plain punny, Hanna cracks us up every single episode. Even when she’s sad, she still manages to toss out some witty one-liners.

We were heartbroken when Toby went A-Team.

We kind of hated it in the very beginning when Toby was supposedly bad, because we were crushin’ on him even back then. So after watching him woo Spencer all this time, we didn’t want to believe our eyes when he turned up in Spencer’s kitchen sporting that signature black hoodie. Nominated for Choice Summer TV Star: Male, Keegan Allen — the actor who plays Toby — deserves the win for managing to make us root for him whether he’s A-Team or not.

Spencer kind of convinced us she should be at Radley.

If we could guarantee one win, we would want it to be Troian Bellisario for Choice TV Actress: Drama. We already loved her character, Spencer, to pieces prior to this season… and now our love has blossomed to obsession. Spencer’s revelation about Toby and a subsequent mental health stint at Radley were so visceral and raw, we sometimes felt uncomfortable watching it. And, admittedly, we may have shed a tear or two.

Summer wouldn’t be the same without PLL.

Regardless of whether or not Pretty Little Liars actually bags the Choice Summer TV Show category, it will remain our favorite summer indulgence. The series should take home a surfboard in this category because we look forward to it each summer the same way we look forward to putting our toes in the sand or driving with the top down — it’s just classic, clean summer fun.

We’re way into the Aria-Ezra-Maggie-Malcolm quagmire.

We know the saga of Ezra and Aria isn’t over and that there is far more drama lurking beneath the surface of the currently calm façade. Maggie and Malcolm came into the picture unexpectedly, and it doesn’t seem like they’ll be leaving anytime soon. But oh how our heart breaks for Aria! Choice Summer TV Star: Female nominee Lucy Hale does such an incredible job of drawing us into her character’s world.

We think actress Janel Parrish deserves major props for playing Mona! If those major props come by way of the Choice TV Villain award, so be it. The girl pretty much tried to kill off the Liars, and yet we still kind of hope she and Hanna will kiss and make up. When she took the heat off of Hanna’s mom by confessing to Wilden’s murder, our jaws hit the floor. Is she a good bad girl? Or a bad girl just pretending to be good?

One thing seems certain… the true measure of a show’s success is how much people want to watch it. We look forward to every little episode of Pretty Little Liars, and we’re pretty sure all the other fans do too. We hate that the summer season is drawing to a close, but at least we have the Halloween special to get us through — not to mention the new spin-off series, Ravenswood, which premieres in October!

More on the 2013 Teen Choice Awards