Lindsay Lohan wows as host of Chelsea Lately. Skeptical? We break down her top 5 amazing moments — but watch the full episode below and judge for yourself. 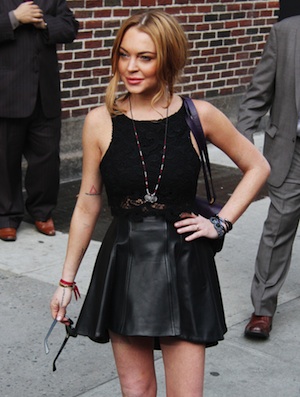 Lindsay Lohan hosted Chelsea Lately? Yep. If you’re like us we were hesitant — even cynical — that Lohan could pull off even a remotely passable performance post-rehab.

Yet despite Lohan’s drug and alcohol problems and years filled with embarrassingly bad movies, she was absolutely flawless as the guest-host of Chelsea Lately.

We even caught a sneak peak of Lohan in The Canyons.

So what made Lohan such a charming fit for Chelsea Lately?

We break down the top 5 most amazing moments of her hosting gig and even have the full episode from last night below.

Lohan talks about Harry Style‘s recent GQ interview in which he was questioned about his sexual partners — specifically if he was bisexual given a recent rumored romantic link to a male DJ.

The punch line she delivers sets the tone for the shockingly refreshing show and is a must-see.

One of our favorite lines of the show involved Lohan’s hilarious joke over her love affair with vodka. It all started when she took on the story of Justin Bieber‘s recent rejection from hot spot Manhattan nightclub the Griffin.

Lohan smiled into the camera and explained to the Biebs that he should have just called her because honestly, club owners really love her.

While critics of the film may not be thrilled with The Canyons it’s clear Lohan is an amazingly talented actress. The scene she choose for Chelsea Lately is intense and emotional; it shows she still has her acting chops despite a shaky personal life.

Yes, Lindsay Lohan is nude (a lot) in The Canyons >>

This will go down as probably the best part of Lohan’s entire guest-hosting gig for Chelsea Lately. While opening up the discussion on the Russian vodka boycott, she not only jokes about the waste of alcohol but also lets the audience in on a secret: she’s allergic to vodka.

“I end up in rehab and jail, that’s what happens,” says Lohan, completely serious.

Lohan mocked Kristen Stewart‘s often monotonic presence when she told Chelsea Lately viewers that Stewart recently put a paparazzo on blast when he got a little too close to her.