Is Kim Kardashian already working on a clothing line for kids? A close friend is “sure” it’s on the horizon. 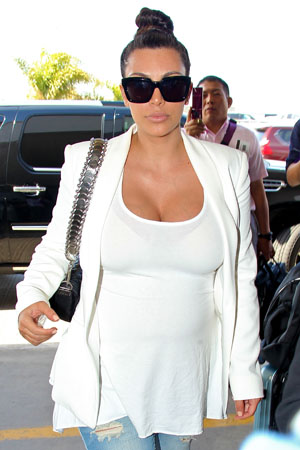 Kim Kardashian might be “loving life a little bit too much at home right now” with baby North West, but a designer pal hints that the 32-year-old might be planning a new baby-fashion venture.

“I am sure she is going to come up with a line for babies,” Canadian fashion designer Lloyd Klein told the New York Daily News. The 48-year-old is reportedly working on a kid’s line right now, so it’s certainly possible that the pair is working together.

“I do have a line that I am trying to put together for children, for babies, and it is called Baby Lloyd, but we are not there yet. There is still a way to go,” he added.

As for what he sees in Kardashian’s potential designs? “[It would be] soft colors, pastels, something very dreamy and still trendy,” he said. We have to wonder if boyfriend Kanye West will appreciate the girly effort, though. Kardashian revealed earlier this year that her rapper beau planned to “have things specially made” for their child.

“I don’t think hand-me-downs are going to work,” she told Jimmy Kimmel. “It has to be really fun stuff… chains and leather pants.”

And it seems like West does have an interest in kid’s clothes, too. Take this with a grain of salt, but the U.K. Sun recently reported that the couple sent “mini versions of Kanye’s [clothing], including skinny jeans and hoodies” to Kate Middleton and Prince William’s infant son, Prince George.

Will we see little George wearing the designs any time soon? “It depends if the Cambridges want to dress him in it,” a source told the paper.

We’re going to assume that’s a big “no.”