Sarah Jessica Parker opens up about how she and husband Matthew Broderick deal with a marriage that is often under the media spotlight. 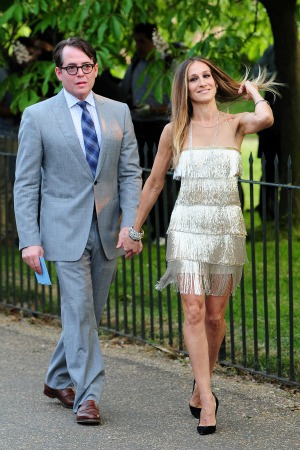 Sarah Jessica Parker appears to be enjoying every aspect of her life right now. She teamed up with Nordstrom to put out her own line of shoes that is expected to hit stores in February, she has three beautiful children and she’s married to the love of her life.

Parker recently spoke to Harper’s Bazaar about her husband Matthew Broderick and how they make their marriage work within the craziness that is show business. When rumors began swirling that her husband was involved in a possible affair, she handled it the only way she knew how — by not commenting.

“Yeah, I didn’t comment on it,” Parker told the magazine, adding, “People have asked me about my marriage, ‘How do you make it work,’ and I say, ‘We don’t talk about it.’ That’s not really true. It’s sort of a nasty response.”

Parker admitted that she and her husband don’t give a lot of thought to their fame. “Matthew and I come from a different time and place. When we were young people, all we ever wanted was to be good working actors. We didn’t think of fame or money because, honestly, money was never part of the dream. It was to work in theater, to be around those people whose work I was in total awe of. I never saw the trappings; nobody talked about being a celebrity. So when our marriage came up in conversation, it wouldn’t occur to us that we were obligated to respond to allegations or gossip. You have to be a bit circumspect, but you also have to take up a position, and you have to stick to it,” she said.

The actress also talked about the many reasons she loves her husband. “I love Matthew Broderick. Call me crazy, but I love him. We can only be in the marriage we are. We’re very devoted to our family and our lives. I love our life. I love that he’s the father of my children, and it’s because of him that there’s this whole other world that I love.”