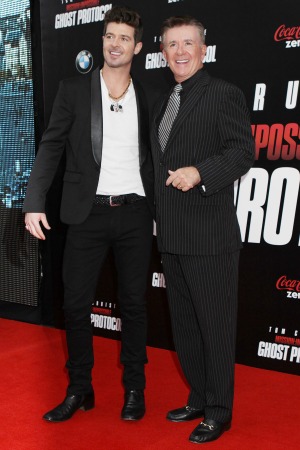 Robin Thicke’s dad is coming to the defense of “Blurred Lines” after some critics accused the R&B sensation of crossing into rapey territory.

“I think that there are blurred lines within the ‘Blurred Lines’. T.I.’s rap is kind of graphic; Robin’s point of view, I think, in his own parts of the song… is kind of female empowerment when you look at it,” he said.

“This is not a lascivious video,” he continued. “There’s no humping and grinding, as we’ve been seeing in music videos for two decades now… We’re not doing the Anthony Weiner story here, [they’re] just kind of putting it out there playfully and we’ll see who responds.”

Robin Thicke finally found something that rhymes with “hug me” >>

As for the outcry over the nudity in the video, Thicke said it’s ridiculous.

“I’m actually a little surprised at the response, at least to the nudity, because I’ve seen things I thought were much more sexual than simply [being] topless. If it was that simple to get global attention and create these maelstrom over simply taking your top off, hell, somebody should have done that long ago,” he said.

“Most of the other videos for years have been about booty… For some reason, when they switched from booty to booby, everyone went nuts.”

As for his son’s success in the music biz, dad couldn’t be more proud.

“It’s insane. I’m so thrilled,” he gushed. “He’s so deserving not only as an artist but as a human being. His work ethic is exemplary. I don’t know anybody that works harder than Robin or takes his art more seriously than he does.”