Kate Bosworth is lucky enough to have found her soul mate and he knew they were destined for marriage, before they even started dating… 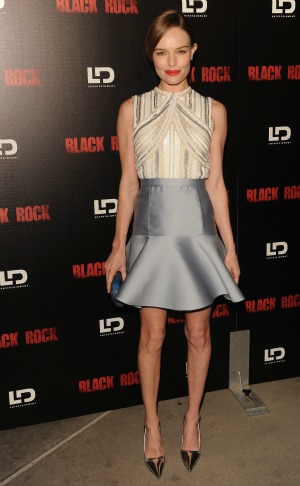 If you believe in soul mates then you are most certainly not alone, as Kate Bosworth‘s fiancé recently revealed he wanted to marry the actress before he had even started dating her!

Others may think that is creepy, but we would prefer to go with romantic! The actress met her future husband, director Michael Polish, when they worked together in 2011 on the movie Big Sur, but at the time Bosworth was in a relationship.

Only after the actress split from actor Alexander Skarsgard in July 2011 did Polish make his move and the pair started dating.

However, even before they got together the director said he wanted Bosworth to be his wife, because he was so enchanted by her.

Bosworth revealed in the new U.K. issue of InStyle magazine, ”I never even dated my husband-to-be. He said to me after just a few weeks, before we were even together, ‘I’m going to marry you.’ He just knew.”

The couple got engaged in September 2012 and appear to be extremely happy as they prepare for their forthcoming nuptials, although Bosworth has remained secretive about the details.

The Straw Dogs actress did mention, ”I can give you one detail: It’s not the norm and whisky will be involved.”

While the beauty is looking forward to her wedding date, she has also learned a lot from her previous relationships, which have molded her into who she is today.

Bosworth spoke about her past, adding, ”When you’re in it, it becomes habitual and it’s difficult to get out of that. You get addicted to the habit. I’m so headstrong and loyal, and that combination will cause me to stay in a relationship far longer than I should.”

Congratulations to this pair of quite obvious soul mates!