New dad Prince William has been in “baby mode” for the past couple of weeks, but now it’s time to head back to work. 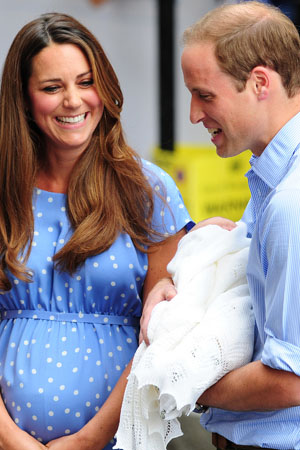 It’s been a happy two weeks for new dad Prince William, but now it’s back to work! The dad of Prince George is set to return to his Search and Rescue pilot duties for the Royal Air Force on Wednesday, according to reports.

“Like any new dad, William is finding it difficult to imagine going back to work and leaving the new baby at home,” a source told the U.K. Daily Mirror over the weekend. “However, he has known all along that he is entitled to the same as every other father, which is just two weeks’ leave.“

That’s not to say he’s leaving his family behind in Bucklebury, though. Sources told the Mirror that he’ll take private helicopters back to Carole and Michael Middleton’s home whenever he has a break.

By George, the royal baby has a name! >>

And something tells us he’ll live for the breaks. The Duke of Cambridge took a break from his fatherly duties on Sunday to play in a charity polo match, but baby George wasn’t far from his mind.

“I was in baby mode out there, thinking about nappies,” he joked to reporters. “I wasn’t really in the zone.”

He added that Prince George “likes to move around a lot. He wriggles a lot, he keeps us on our toes.”

The other half of “us,” of course, is his wife, Kate Middleton. William didn’t talk about the new mom at length, but sources say he’s quite the appreciative husband. According to the U.K. Daily Express, the 31-year-old dad gave his wife a brooch with a pink diamond as a push present.

“William has been giving this a lot of thought for a long time,” a source told the newspaper. “He’s got lots of ideas from studying history of art at university and decided on a pink diamond as a centerpiece because it is pretty and feminine. It will be a thank you present to Kate.”

We can’t wait to see her wear it!