Teresa and Joe Giudice face deportation and decades in prison for 39 counts of fraud. But right now, it’s all about the Hamptons lifestyle for the New Jersey family. 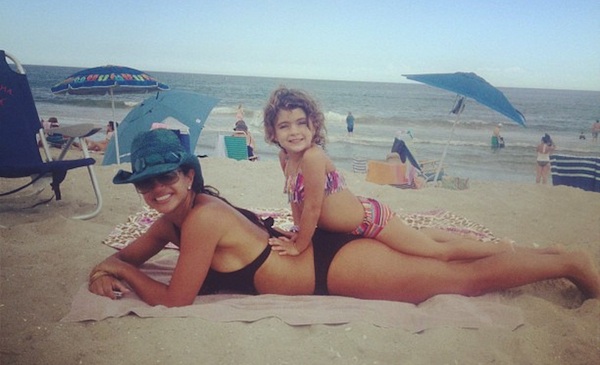 Teresa Giudice — star of Real Housewives of New Jersey on Bravo television — doesn’t appear to be worried that her husband, Joe Giudice, faces deportation to Italy if convicted of fraud.

Just two hours ago Teresa Giudice took to her Twitter account and posted the above photo of her and her daughter, Audriana, lounging on a beach in the ultra-exclusive and very affluent New York community, the Hamptons.

The photo — tweeted to over 760,000 followers — is just one of several posh vacation photos made public in the last few days. All the pictures show Teresa and Joe Giudice seemingly oblivious to their massive legal trouble: Teresa is cooking and sunbathing while Joe plays in the water with his children.

CelebrityNetWorth shows Teresa Giudice’s net worth at a bleak negative $11 million, yet almost each tweet makes a clear attempt to show the New Jersey reality stars enjoying a leisurely life.

And even though the Bravo couple plan to plead “not guilty” during their next court appearance on Aug. 14, 2013, we wonder if this late summer Hamptons vacation marks one of the last times the family will be together. A New Jersey news agency says federal prosecutors warned Joe Giudice last week he faces deportation given the seriousness of the fraud charges.

Joe Giudice is a legal permanent resident from Italy and, if found guilty of just some of the numerous charges against him, could likely serve both a hefty prison term and then be deported once released. Just one of the counts brought against Teresa and Joe allows for a 30-year prison sentence alone.

A Newark grand jury found probable cause against the Jersey couple. Teresa and Joe plan to contest the charges but their defense against the fraud charges is not clear.