The former bassist and front man for Pink Floyd is under fire from a rabbi for flying a pig balloon wearing a Star of David at a recent concert. 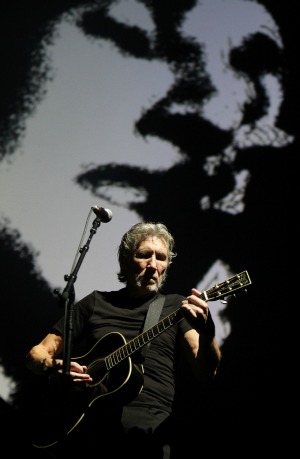 Roger Waters of Pink Floyd is feeling the heat from the Jewish community after flying a pig balloon at a recent concert in Belgium. The problem? Waters, a vocal pro-Palestinian campaigner, made sure the pig was wearing a Star of David.

Rabbi Abraham Cooper of the human rights group the Simon Wiesenthal Center slammed the tasteless decor as a “grotesque display of Jew-hatred.”

“With this disgusting display Roger Waters has made it crystal clear: forget Israel, never mind ‘limited boycotts promoting Middle East Peace,’ Waters is an open hater of Jews,” Cooper stated in an interview with the website The Algemeiner.

The pig, which was also decorated with dollar signs, a cross, a Communist hammer and sickle and the corporate logos for Shell oil, McDonald’s and Mercedes lead Cooper to imply that Waters is a shill for Islam.

“The video is beyond shocking. The only books this bigot should be getting should be with the Mullahs in Iran and the Muslim Brotherhood.”

Waters immediately fired back on Facebook, calling Cooper’s accusations “inflammatory” and “bigoted” and saying he even has the backing of the Anti-Defamation League.

“Often I can ignore these attacks but Rabbi Cooper’s accusations, are so wild and bigoted they demand a response,” Waters wrote in an open letter to the rabbi.

“I hold your outburst to be inflammatory and un-helpful and would suggest it can only impede progress towards peace and understanding between people. It is also extremely insulting to me personally in that you accuse me of being ‘Anti Semitic’, ‘A Jew Hater’ and ‘Nazi Sympathizer.'”

“Like it or not, the Star of David represents Israel and its policies and is legitimately subject to any and all forms of non violent protest. To peacefully protest against Israel’s racist domestic and foreign policies is NOT ANTI-SEMITIC. Your contention that because I criticize the Policies of the Israeli government I should be lumped in with the Muslim Brotherhood is risible, and again a personal affront. I have spent my whole adult life advocating separation of church and state.”

The Anti-Defamation League did in fact back him up (mostly), stating, “While we wish that Mr. Waters would have avoided using the Star of David, we believe there is no anti-Semitic intent here.”

Watch the Pink Floyd pig and judge for yourself

Tell us: Is Roger Waters anti-Semitic or a peaceful protester?