Joan Rivers is ready for love, again, and she’s doing it Bachelorette-style. 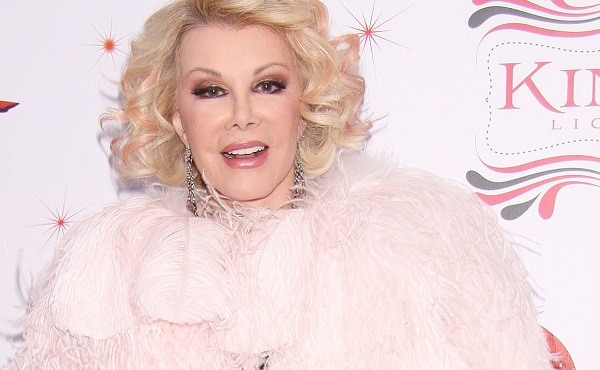 After more than 15 years as a single woman, Joan Rivers is ready to try her luck at love once again and she’s doing it for all the world to see! Starting in September, Rivers will star in an all new webseries on SheKnows TV, Romancing the Joan.

Romancing the Joan will highlight eight eligible (and yummy) bachelors parading around in front of Rivers in an effort to win her heart. They’ll have mere minutes to make their first impression before she makes the first cut. Joan gave it to us (mostly) straight about the kind of guy she wanted when she told us why she decided to do the show.

Oh, Joan! Have you seen what she has to say about love and sex? >>

“How else am I going to hook up with rich black guys,” Joan quipped. Oh my!

Hosting the entire extravaganza will be the world’s other famous Rivers, Joan’s daughter Melissa. Melissa, just like her mother, is quite opinionated, so we’re certain she’ll have a say in who will step in to take on the role as her new stepdaddy. Making things more interesting, some of them might actually be younger than Melissa. What will she think of all the young men who show up and vie for her mother’s hand? And how will she handle things as the romance gets turned up to 11?

An even bigger element to the show will be getting to know Joan Rivers. We know her humor and we know her sass but, how much do we know about her passion? Will she get caught up in the throes of love with one of the eight hunks and will we see her sneak away from any of the cameras with one of her new male friends? Will there be any scenes shot with night-vision cameras?

We can’t wait to see who Joan picks, what she’s like when surrounded by so many gorgeous guys and how Melissa will react to witnessing all that man-candy trying to get their hands on her mom! As for Joan, she’s already planning her next big stunt.

“I can get somebody else to underwrite the cost of my sex tape,” she suggested. For Joan, there’s one more thing to look forward to for Romancing the Joan. “Getting better ratings than Katie Couric.”

For more Joan and Melissa Rivers and other celeb gossip, sign up for our newsletter! >>

In Romancing the Joan, Joan Rivers must choose between 18 bachelors. Lucky for you, you can choose them all at Renuzit.com.