In the two-hour Season 3 finale of The Killing, called “From Up Here” and “The Road to Hamelin,” everyone begins to move on after Ray’s execution and the capture of Mills, but new evidence leads to a new (or is it?) crime. 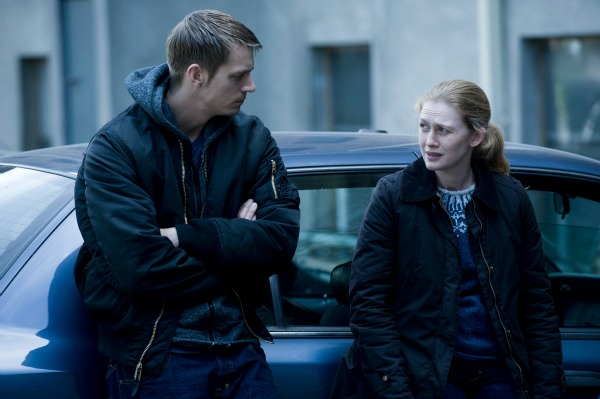 OK, so does everyone remember when I asked in my recap of last week’s episode if things could get any worse? Well, that question was answered in this finale. Linden (Mireille Enos) was still hurting after what she went through with Ray (Peter Sarsgaard) and found herself seeking comfort in Skinner’s arms. Holder went to Bullet’s (Bex Taylor-Klaus) funeral, but I don’t think it gave him much solace since it was geared more toward how her parents wanted to remember her rather than the girl that she was. He and Caroline (Jewel Staite) made up though, which was nice and it looked for a little while like things were looking up.

The Killing Season 3, Episode 9 recap: Will the killer get a new victim? >>

There was even a touch of humor as Holder (Joel Kinnaman) and Linden went back to work on a new case. He of course figured out she had slept with Skinner (Elias Koteas), but he acted as if he was truly happy for her and, heck, even got a smile out of her. Yep, it looked like the old story was over and that the episode was going to just go straight into a new case for the next season. But then things went very wrong.

As Holder and Linden followed the evidence of the new murder victim, they discovered that it appeared to be Angie and that she had been killed just one day before… while Mills was in prison. The more they tracked down the leads, the more it led them to the fact that the killer of all those girls was still on the loose. Remembering something that Ray had said, Linden found Adrian’s tree house in the woods and realized that he would have been able to see where the killer had dumped the bodies of his victims.

A visit to Angie’s father’s house revealed that Reddick (Gregg Henry) knew the girl and suddenly everything added up. Adrian went missing and they knew that Reddick must have him. Holder and Linden told Skinner what they found and he told them he wanted to confront the other man himself. It all made sense, but soon Holder was being held by IA on bogus charges while Linden realized that it was in fact Skinner (confused yet?). She pulled her gun on him but when he said that Adrian would die, she was forced to go on another drive with another lunatic.

The Killing recap: Linden gets in deeper >>

In the end, Reddick found Adrian alive and Holder got there just in time to hear Linden shoot Skinner. She thought he killed Adrian, but even after Holder told her the little boy was OK, she didn’t drop her weapon. Holder begged her to drop the gun, but Skinner begged her to finish the job because she loved him and it had to be her who did it. In a split second, Linden made a terrible decision and killed Skinner, leaving poor Holder in shock.

It was definitely not where I thought this season would have ended and I am at a loss to try and speculate too hard on what Linden’s actions will mean for the next season. Will she and Holder attempt to play off the shooting as self-defense? That would seem like the only option, but this show has proven to me time and again that it doesn’t always go down predicted paths, so it’s really anyone’s guess.

“Sometimes I think people like us, we’re just supposed to be alone.”

“I just wanted you to see the good stuff.”
“That is what I see.”

Linden telling Holder that he looked good because he had changed his “thingie.”

Finding out that Linden used to sing in the car all the time.

Holder honking the horn in joy when he found out he was right about Linden and Skinner.

“What do you want to do? Let the state hang another guy who didn’t do it?” — Ouch.

Holder spotting a picture of Reddick on Angie’s dad’s wall.

Linden telling Holder her story about running away when she was in her first foster home.

“You mind if we take a look at your phone?”
“As long as you don’t mind the pictures of me banging your momma last night.”

“You couldn’t solve a crime if it fell out of the sky and sat on your face.”

Skinner telling Linden how it all got started and talking about the look in the girls’ eyes. So creepy.

“I should have seen.”
“You didn’t see because you didn’t want to see.”

Holder desperately trying to get Linden to put her gun down, while Skinner begged her to shoot him.

Holder’s scream of “NO!” when Linden shot Skinner.

What did you think of the season finale? Do you have any theories on what will happen to Linden next season?