Matt Damon takes a break from the high-octane action of Elysium to show his softer side. In this exclusive clip, his character tries his best to get the attention of one lucky lady. 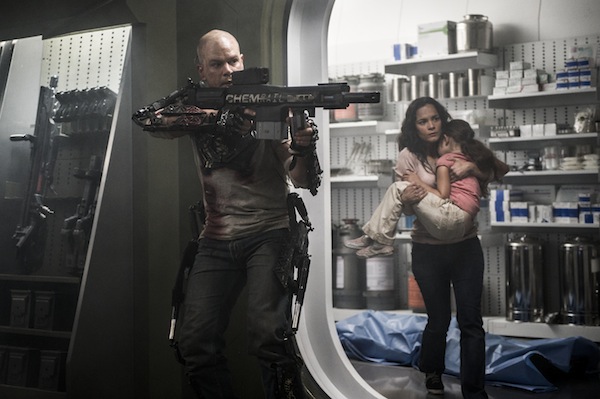 Matt Damon‘s back in butt-kicking mode. This weekend, he headlines Neill Blomkamp’s latest film, Elysium. It boasts an all-star cast, including a villainous Jodie Foster and District 9‘s Sharlto Copley. SheKnows has an exclusive clip that features Damon and co-star Alice Braga.

Elysium, written and directed by Blomkamp, takes viewers to the year 2154. Earth as we know it has become a polluted mess, barely habitable by humans. Considering the conditions, the rich and powerful came up with a plan. They pooled their resources to create a man-made space station called Elysium.

Elysium is everything Earth isn’t. It’s beautiful, clean and occupied by the wealthy. It’s as exclusive as you can get. Damon’s character, Max, is desperate to get to the station because its citizens have access to the best medical care. Diseases and injuries can be cured at the push of a button.

In the following clip, we see Max reunited with his childhood friend Frey (Braga). He’s a former car thief turned factory worker, while she’s a nurse. After a chance run-in at the hospital, Max attempts to reconnect with her. Unfortunately, she’s not easily swayed. Who would say no to a date with Matt Damon?

Matt Damon: I spend my life trying to be like Brad Pitt >>

Check out the exclusive clip below:

What do you think of the latest clip from Elysium?