Spoilers from the set of The Mindy Project including information on a (maybe) wedding, upcoming guest stars and much more! 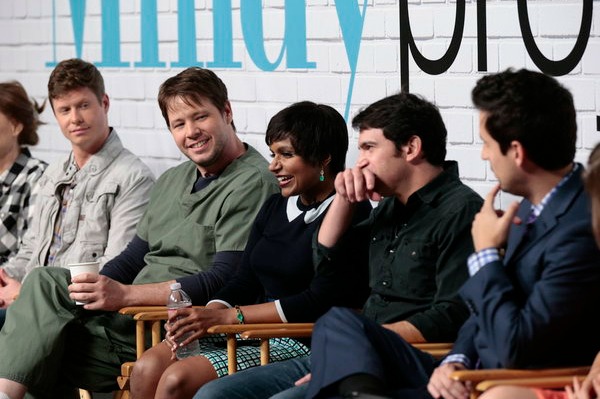 The cast and creators of FOX’s hit series The Mindy Project welcomed SheKnows and other media outlets for a special press conference and tour of the set of the show. During the visit, the cast gave away a few spoilers for the show’s upcoming second season — some of which weren’t intentional.

Here are a few things that were learned during the press conference:

The Haiti story will be addressed right away

When asked what will happen when the show returns, star Mindy Kaling promised that fans will get to see what happened in Haiti after last season’s cliffhanger.

“We felt like it would be lame if we didn’t actually go to Haiti so we do,” showrunner Matt Warburton added.

Once fans get the story of what happened in Haiti, they will follow Mindy’s journey back to New York and meet someone new in Mindy’s life, played by James Franco. Kaling described Franco’s character as her nemesis, while co-star Ike Barinholtz called him the “anti-Mindy” and said the guy was “everything that Mindy is not.”

James Franco to guest star on The Mindy Project >>

The boys will drag Mindy to a music festival

Asked about what else was coming up in Season 2, Barinholtz said, “We are going to go to a music festival at some point.”

Warburton added, “Yeah. You know, imagine Mindy dressed like that in a muddy Coachella-type environment.”

Kaling added that Mindy hates live music, but the guys love it and they will have fun subjecting her to it.

More of the other characters’ lives will be expanded

When asked what would be happening with some of the other characters on the show, Kaling said, “The lives of our main cast get expanded too, in a way. Last year we didn’t get a chance to meet Ed Weeks’ father — which is a hilarious character — very early in the season, and Xosha’s boyfriend.”

Warburton added, “While Mindy [was] away, the characters’ lives kind of advanced, and Danny has kind of moved along in his relationship, too.”

Fans were shocked when Mindy sheared off her locks, but Kaling didn’t cut off her own hair for the sake of the character. The new look is actually a wig and while Kaling loves it, not everyone else is as enthusiastic about it as she is. “I love having the short hair. I think it’s so fun,” Kaling said. “My writing staff largely hates it, [but] I think it’s really fun, and chopping your hair off is something every woman fantasizes about doing.”

Mindy Project‘s Ike Barinholtz says he may get real ink >>

The series recently added actor Adam Pally to the cast and when asked to talk about what his character would be like, Kaling said, “I went to Dartmouth College and, until now, I have not been able to satirize my favorite kind of Dartmouth character, which is a kind of well-educated frat guy who is both congenial and ultra into his frat.”

Barinholtz added, “He’s able to play low status while playing high status. He can do something that’s really demeaning and be proud about it. Do you know what I mean? Like ‘What a great day. I’m going to go home and knock down a French bread pizza’ — and it’s hard to do. He came to the table reading last week, and everyone was just so excited because we couldn’t have scored bigger. We’re really excited.”

The list of great guest stars will get even longer

Asked what guest stars would be making an appearance in Season 2, Kaling said that they have people such as Anders Holm, Bill Hader, James Franco and Chloe Sevigny are all back in — and that’s just in one episode!

Someone is getting married… maybe 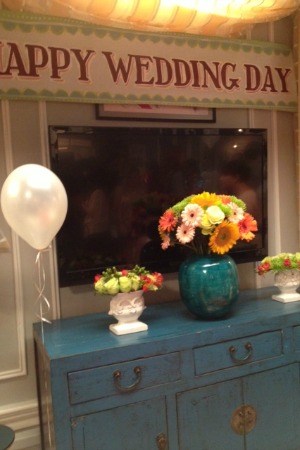 When the press was allowed to walk through the set for the show, they noticed that Mindy’s apartment was decorated for a very special occasion. White balloons festooned the walls, a stack of presents were on the counter and there was a big banner that said “Happy Wedding Day.” There was even an unusually shaped cake that said: “Happy wedding: Casey and Mindy!”

When asked for details about the decorations, Kaling laughed and said that perhaps bringing a bunch of journalists through the set might have been “bad planning” on their part. Pressed for details, she said, “In the premiere Mindy and Casey come back and there is a wedding,” but was reluctant to add more.

She did, however, explain the shape of the wedding cake, which appeared to be a… rocket ship? Kaling said that the wedding was “impromptu” and due to the lack of time to plan, certain adjustments had to be made. The bakery only had two shapes of wedding cake available — a menorah or a penis. Mindy chose the penis cake and made the best of the situation.

Does this mean that Mindy and Casey are for sure married and will be starting their life together in the second season? Don’t be so sure. Kaling also said during the press conference that “Mindy gets to be single again pretty soon.”

Want updates about your favorite TV shows sent directly to your inbox? Sign up for our SheKnows newsletters! >>

What do you think happens between the wedding party and Mindy becoming single again? Do you think it’s just a simple breakup or will the wedding turn out to be a fake?