Tara Reid is basking in the glow of her recent success. Her latest made-for-TV movie, Sharknado, has thrust the American Pie actress back into the spotlight. 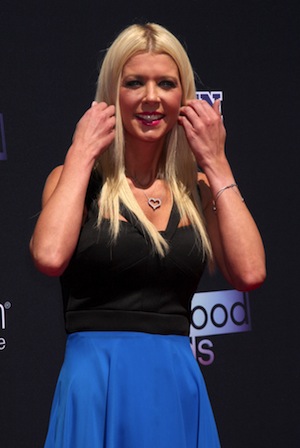 Hold on to your butts: Tara Reid is back! The actress, who made a name for herself in the late ’90s, is experiencing a resurgence. Thanks to SyFy Channel’s Sharknado, Reid has returned to the spotlight.

Thanks to social media, Sharknado‘s become a cult phenomenon, and its massive internet presence has led producers — in a rare move — to unleash the film in theaters. You can watch it on the big screen starting this weekend. Special midnight showings have been commissioned all over the country, and they’re selling out!

First look: Stifler and the gang reunite for American Reunion >>

When Reid first read the script for Sharknado, she thought it was “so insane and ridiculous,” saying in a conference call with reporters before its showing, “I laughed so much because it’s the most crazy concept.”

But she bit the bullet, and it’s paying off. The idea of a shark-filled tornado terrorizing a city is laughable, but the actors tried to approach their roles earnestly.

When Reid had to pretend her car was being attacked by multiple finned creatures, she couldn’t contain herself. Both she and the director, Anthony C. Ferrante, had a good giggle about it.

“We laughed so hard because it was so ridiculous,” Reid told reporters.

It’s great to know that Reid and Ferrante are on good terms. Shortly after the film’s release, there was a rumor that she’d been axed from the upcoming sequel. However, executive producer David Latt told EW that Reid was great to work with and the next film’s still in development.

“We talked the storyline through, and there are no restrictions,” he explained. “So it could be the family that goes over, it could be a prequel before Ian [Ziering]’s family was involved in it. It could be 10 years in the future… There are so many possibilities. So if the story lends itself to the original actors being in part two, hopefully they’re available and hopefully they won’t charge us too much [Laughs] and hopefully they’ll be in it.”

Have you bought in to the Sharknado craze?