Lindsay Lohan had a busy week. She exited rehab and went right to work over at E! to fill in for vacationing host Chelsea Handler. 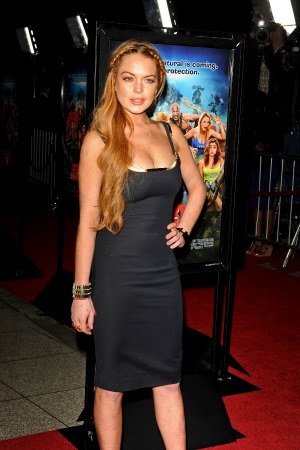 Remember how quiet it was over the last 90 days with Lindsay Lohan in rehab? Well, that quiet time is officially over as the 27-year-old heads back to work. On Thursday, Lohan filled in for Chelsea Handler on her E! show Chelsea Lately.

The reviews are in and it looks like The Canyons star is getting a big thumbs-up for her guest-host stint. While the show won’t air until Monday, Aug. 5, E! News gave a short preview of what the audience will see.

Lohan looked fit and healthy in her all-black outfit as she arrived on time for rehearsals. She was even able to do the opening monologue in one take and she proved she can handle a few of the jokes written at her own expense.

The banter was even funnier when the actress hit the roundtable discussion with several comedians. The first celebrity she ripped on was One Direction boy-bander Harry Styles.

Lohan talked about his recent British GQ interview where “he was questioned about rumors that he’s bisexual with a DJ named Nick.”

She immediately joked, “I’ve been there,” in reference to her former relationship with DJ Samantha Ronson.

The audience roared with laughter over the inside joke.

Lohan also had a sharp comeback for Styles’ insistence that he’s “only ever had sex with two people.”

She called his bluff and said, “Yeah, he’s never hung out with The Wanted and he’s obviously not counting oral. Sorry, Harry!”

In addition to her surprising comedy, Lilo interviewed actor Dylan Bruce from the BBC show Orphan Black. No word on what he thought of her performance, but Lohan seems to be sharper than ever and back on track.