Darren Criss of Glee and Lucy Hale of Pretty Little Liars team up to co-host the 2013 Teen Choice Awards. 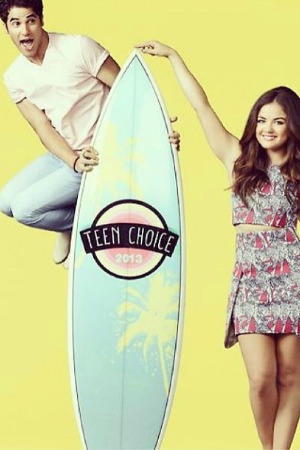 Glee certainly has a lot of chances to win, thanks to having no less than seven nominations on the 2013 list of nominees. The show is up for TV Show: Comedy, plus many of the actors and actresses are up for individual awards including TV Actor: Comedy, TV Actress: Comedy, TV Villain, TV Male Scene Stealer, TV Female Scene Stealer, and TV Breakout Star.

Pretty Little Liars has three nominations, including TV Show: Drama, TV Actor: Drama, and TV Actress: Drama. While PLL may only have three nominations, there’s no telling what will happen once the votes have been counted and the big night has arrived.

If fans want to help their favorite shows and actors win, all they have to do is vote. Fans ages 13-19 can vote once each day per category for their favorite nominees at www.teenchoiceawards.com. Voting will end at 11:59 p.m. PST on Saturday, Aug. 10.

Hale shared the news with her followers on Twitter:

She also posted a photo on Instagram that showed the two of them goofing off with a surfboard emblazoned with the show’s logo. Let’s hope that nothing gets in the way of their camaraderie, say, like a little bit of rivalry over which of their respective series will take home more awards.

The Teen Choice Awards is always a fun show, but one has to wonder if they’ll also find a way to honor Glee star Cory Monteith after his untimely death. The actor passed away just a few weeks ago due to heroin and alcohol toxicity, leaving the creators of Glee struggling with how to finish his character’s story on the hit series.

The Teen Choice Awards airs live on FOX Sunday, Aug. 11 at 8 p.m. EST. Don’t forget to tune in to find out who will win!