Prince William is now “official” — he just got his birth certificate! 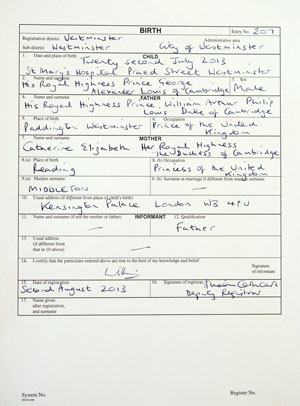 Most parents have to trudge down to the registrar’s office to get a birth certificate for their newborn children, including Prince William and Kate Middleton. OK, so maybe that part was taken care of for them, but newborn Prince George finally has an official birth certificate — and we’ve got the first look!

“The birth certificate for His Royal Highness Prince George Alexander Louis of Cambridge has been signed,” Clarence House tweeted on Friday, along with a photo of the official birth certificate.

It’s a pretty standard birth certificate, though the occupations listed are anything but standard. Mom Middleton’s occupation is listed as “princess” of Great Britain, though her official title is the Duchess of Cambridge.

Actually, her occupation should be listed as professional bada**: she reportedly made it through 11 hours of labor without any painkillers. It’s not like that was any easy feat since little George came into the world at 8 pounds, 6 ounces.

The Duchess is also reportedly breastfeeding her healthy son. Rumors swirled after she was spotted in a Seraphine nursing dress — and now a source tells the U.K. Daily Mirror that she’s getting the hang of it.

“It would be fair to say that Prince George has a healthy appetite. He is a very hungry little boy,” the source told the newspaper. “I gather there were some difficulties at first — there often can be, as new mums can get a little tense. But after some help from the midwife, they both caught on very quickly. As far as I can tell, Kate finds it very relaxing and George is just like any other little baby.”

The royal baby meets his grandparents! >>

And, like most boys, he has a healthy appetite.

“He can’t get enough. And they all certainly know when he’s hungry — his screams are very difficult to ignore,” the source continued.

Breastfeeding supporters are hoping that the “Kate Effect” transfers from fashion to breastfeeding. The practice has fallen out of favor with younger mothers, but Middleton’s support might change their minds. However, she’s not seeking to become the poster mother for the movement.

“Don’t expect Kate to be photographed breastfeeding. She does not want to become a pinup for the breastfeeding lobby,” the source continued. “She feels that it is a matter of personal choice, and that new mums should do whatever feels right for them and their baby.”