Kim Kardashian made her first official appearance since giving birth. Did she show off baby North West, too? 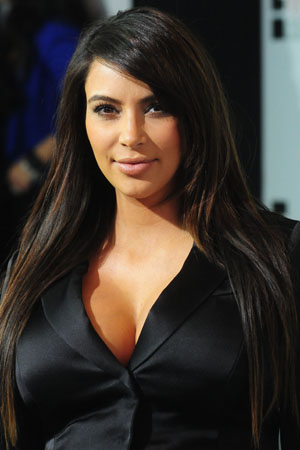 Kim Kardashian made her big post-baby debut Friday on mom Kris Jenner’s eponymous talk show, but it wasn’t exactly the big reveal we’ve been waiting for.

The mom of newborn North West appeared — from the chest up — to congratulate her mom on her new show.

“I just wanted to say congratulations on your new show,” the 32-year-old said.

“I’m sorry I couldn’t be there in person, but I’m just loving life a little bit too much at home right now. But I watch you every single day and you are so amazing. You really are born to do this.”

“I just want to say I love you and have an amazing show.”

Pretty sweet! But we have to wonder: Why the random appearance? RadarOnline claims that Kardashian wanted to make her first big debut before her sister Kylie Jenner has her big Sweet 16 birthday bash later this month. Kardashian doesn’t want to take away from her sister’s day, but fat chance of that happening.

Kim and Kanye want their own thrones >>

Kardashian is reportedly trying to get back to her pre-baby weight before she gets back to work — and Jenner told her co-host, Diddy, that her daughter “is happy and healthy.” Jenner said, “She’s eating really well, working out a little bit, and nursing.”

The new mom is reportedly making “great progress” on her weight loss, but she’s not starving herself to get there.

“She’s not there yet, and if she were there already, it would be freaky weird,” Jenner said earlier this week.

At least we got a little peek at post-baby Kim, but we’re really waiting to see baby Nori. C’mon!