Robin Thicke and The Roots dropped by Late Night with Jimmy Fallon and the whole group (including Jimmy) did a jam session with toy instruments to perform “Blurred Lines.” 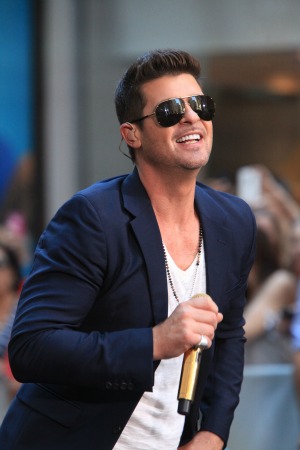 Today is Friday so chances are you’re already in a great mood, but on the off chance that you woke up this morning on the wrong side of the bed or are just having one of those mornings, Jimmy Fallon and Robin Thicke have the perfect video for you.

Jimmy Fallon has always been a great singer. Back when he was on Saturday Night Live, a lot of his best acts and characters were the ones involving songs. Sometimes he did original stuff that he made up himself and sang with an acoustic guitar. Sometimes he did spot-on impressions of other singers and sang their stuff (occasionally better than the original artist did themselves).

Since he’s had his own talk show, Late Night with Jimmy Fallon, he’s been making a habit of singing with the musical acts that he’s brought onto the show. If you haven’t seen every single one of the “History of Rap” videos that he’s done with Justin Timberlake, then you’re seriously missing out.

Justin Timberlake vs. Robin Thicke: Which R&B artist is better? >>

Last night, Fallon decided to play along with one of his musical guests, but he also added a new twist to the performance. When Robin Thicke dropped by with The Roots to perform Thicke’s hit “Blurred Lines,” it’s doubtful anybody expected them to do it quite the way that they did.

Instead of going on the brightly lit stage, the group stuffed themselves into what looks like a dressing room backstage, picked up toy instruments (including a xylophone, a cowbell and even a… banana?) and did the entire song from beginning to end.

Probably the most amazing part of this story is that the classroom-instrument version is nearly indistinguishable from the original. Check out the video and see for yourself.

There are a lot of “Blurred Lines” parodies out there, but who would’ve guessed that Thicke would (sort of) make one of his own?